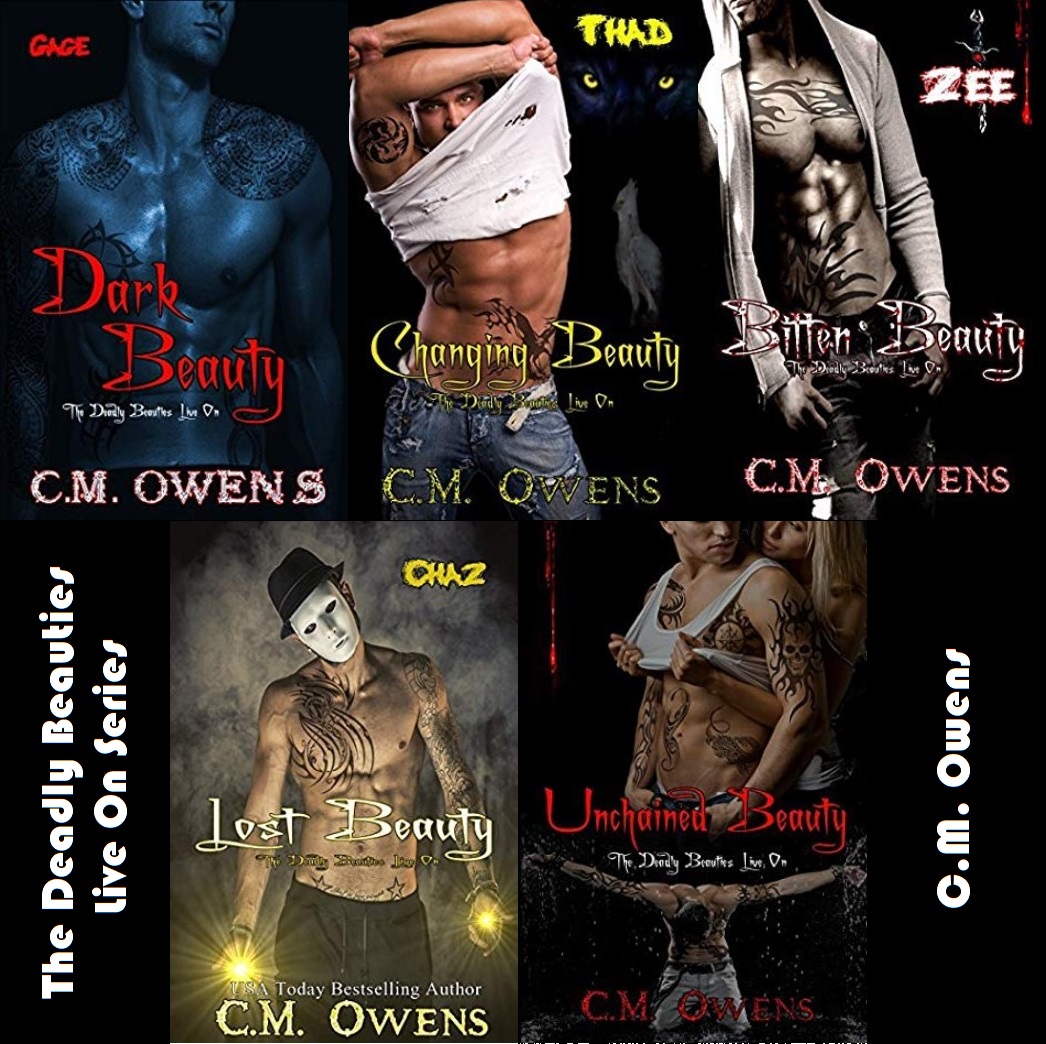 Purgatory was opened for the dark ones to escape, but so much more crept out. Over twenty years later, the consequences are finally starting to appear. And the world full of deadly beauties finds even more deception and secrets to face.

As an immortal, it’s hard to have any new experiences after living for so long. History seems to repeat itself… over and over. No one knows that better than Gage Kross, the dark user many overlook. But even if you think you know how something is going to end, sometimes life doesn’t give you the choice of deciding what to do.

When he meets Kimber, something that he thought died inside of him suddenly comes back to life. However, she’s supposed to be one of the few women he can’t be with. Then again, the sweetest fruits are usually the forbidden.

Just when things heat up, life unravels and ghosts come back to haunt Gage and his friends. The past invades the future, consequences are revealed, and impossible secrets emerge from the darkness, while new secrets are formed.

It’s hard to trust people who are trained to hide the truth, so falling in love seems to be a daunting task no matter what. But it’s a world full of seduction, and sometimes love happens whether you want it to or not – even when death is breathing fire down your neck.

Although this is a book one, there is no major cliffhanger.

I had to say this book didn’t disappoint me at all. There were still some unanswered questions to the previous series, and we learned a few of them from this book. Featuring Gage and Kimber, the romance continued in this story, and this book featured alternating POVs of the two main characters.

Kimber, the little gatekeeper girl from the previous series, had now grown up, and she was fixated on Gage. It’s a good thing that nothing was stopping the relationship between the two, but overprotective!

New mysteries were raised in this story about Chaz, Alyssa’s childhood friend, and also Zee. What’s Chaz’s origin and power? What would happen to Zee with the newly acquired power? Find out more from the next book!

The survival of the deadliest continues…

I’ve never had to play games to get what I want, and we both know exactly what I want. And the second I get a chance, I’m bringing her into my world permanently.

Thad isn’t like anyone I’ve ever met. I’m not sure if he’s the best or the worst thing that has ever happened to me. But I do know I’m becoming addicted, and he seems to love the hell out of it.

The only problem is that the world around us isn’t quite as simple as I once thought, and nothing is easy anymore… including staying alive.

Thad wasn’t what I envisioned he would be. He was a completely different person to the first book in Deadly Beauty, a player, and couldn’t keep his hand off Alyssa. Here, he’s showing maturity, loyalty and was very possessive over Roslyn, and he wouldn’t give up on her no matter who she turned out to be.

The moment Roslyn laid her eyes on Thad, she was already smitten. At first, she was just a normal girl, without any secret, but as the story progressed, little by little, we learned something new about her – the blackout, her life history, parents, and how these two were perfect for each other.

The story was getting better and better, with the storyline executed brilliantly and smoothly. At this point, I still couldn’t guess who’s the main culprits behind the slave ring and also the primary purposes of all the trouble. It couldn’t be Castine or Hilly, right, because they died during the Red Moon’s final battle.

I’m also super excited about Alyssa and the coming soon family member; he or she would be powerful and might be the key to thaw all the trouble in paradise? Maybe no, because she/he would still be little 😉.

I didn’t choose this life. I didn’t choose my fate. In fact, fate seems to have thing for fucking me over. Leah is just one more thing I didn’t choose, and now I’m fighting everything in me not to turn her into the monster I never wanted to be. But we both know what’s going to happen in the end, because as always, I have no control.

He’s wrong and right in the same breath. He’s terrible and perfect. Most importantly, he’s my savior and my damnation. This world isn’t supposed to exist, and I’m not sure if I’m insane or dreaming. Either way, I can’t stay away from Zee, even if it means I might lose myself to him completely. Thing is… he’s the safest option, because every path is deadlier than the last.

I always wanted to comment about Dice but kept on forgetting when I wrote a review. Dice was the clown in the group, and I liked him a lot. I find his hashtag quite entertaining, especially when he executed it in the perfect moment, but he could be annoying as hell with his antique when he tried too hard.

Meanwhile, the main characters, Zee and Leah, faced a difficult time. Leah didn’t know she was something special. When she landed with Zee’s team, she ran away but ended up with Kya’s group. Tossed around between the two groups, it wasn’t long before all hell broke loose, and Leah realised she wasn’t what she thought she was and was labelled as dangerous by the others.

On the other hand, Zee tried hard to stay away from Leah, defying his needs to sire the Aquarius girl. But when Leah in danger, he couldn’t resist to save her. It was interesting how the author wrapped up the story, making the impossible became possible. Salute you, C.M. Owens.

Survival. It’s all I’ve known for as long as I can remember. I thought it was the same thing as living until him…

Until one touch set me on fire.

Until one look disabled all my defenses.

Until one man could shatter me.

Now, even though a distraction is the last thing I need, all I want to do is taste what it’s like to feel alive.

She sees right through me, as I knew she would. It’s why I’ve avoided her. But what I never expected her to do was awaken something inside me that melted the cold I’ve grown used to. Instead of feeling numb to the world now, I feel like someone who has too much to lose. And she may be someone worth surviving for. The edge she gives me just may keep us all alive.

The first time when the author introduced kya to us, I thought she was a heartless bitch. I remember Karma and the team went out searching high and low for her, and in the end, she disappeared on them. This book revealed her real feeling, how she wasn’t a cold-hearted bitch. Instead, she cared about Karma and left to protect her.

The question to what Chaz was and his true heritage finally answered in this book. I believed many of us have been wondering since the first book! Other than Kane or Alyssa, I never thought other powerful beings existed, and the wait was worth it!

The big mystery to who the master was also finally revealed in this book, and it wasn’t who I expected. I barely knew her and couldn’t remember much on the introduction of her. If my memory serves me right, I remember her from book one 😉.

I’ve spent my life thinking I knew the worst that could happen.

Battles come and go. Wars are almost always won in the end. It’s easy to grow complacent and forget even the deadliest should glance over their shoulder from time to time.

We thought we had it all figured out.

We were poised for this win before we even went to battle.

We didn’t win. We didn’t lose.

We thought a demon would be easier to kill because it’s “just” a demon.

Now we’re dealing with the mess from our latest failure.

Meanwhile, I’m still trying to do something other than be the biggest disappointment of all, searching for my place while avoiding the one man who could possibly kill me, if he wasn’t so busy constantly saving me. My “hero” happens to be my family’s enemy, despite the uneasy, temporary truce between us as we combine forces to work against a common enemy.

The enemy of my enemy shouldn’t be more than that. Really, he shouldn’t. Slade is a terrible person who has done terrible things since he’s been freed. Nothing he can do can redeem himself. At least that should be the truth of it.

Just when we think we have it all figured out again…everything changes.

For once in our entire existence, it may not matter who the deadliest is, because all the rules are being broken.

Final book read for the year 2020, and this series was an absolute winner of the year!

What a fantastic conclusion to the series! Damn the plot twist, I didn’t see that at all, and I love it. Slade wasn’t scarred for nothing; it was part of the epic sacrifice to save the one and only girl that’s matter to him.

The final battle was a bit chaotic, I was a bit worried how it would end with Slade’s and Ella’s plan on the run, but thankfully, everything goes smoothly, just what I wanted, a HEA! I was also thankful for the epilogue and the author’s note because I needed it to let go of this series, for now.

Anyway, I hope the next spin-off to this series about Kicera, Cole, and the Dragonites would be out soon! Meanwhile, I’ll patiently be waiting and read the other series by the same authors.