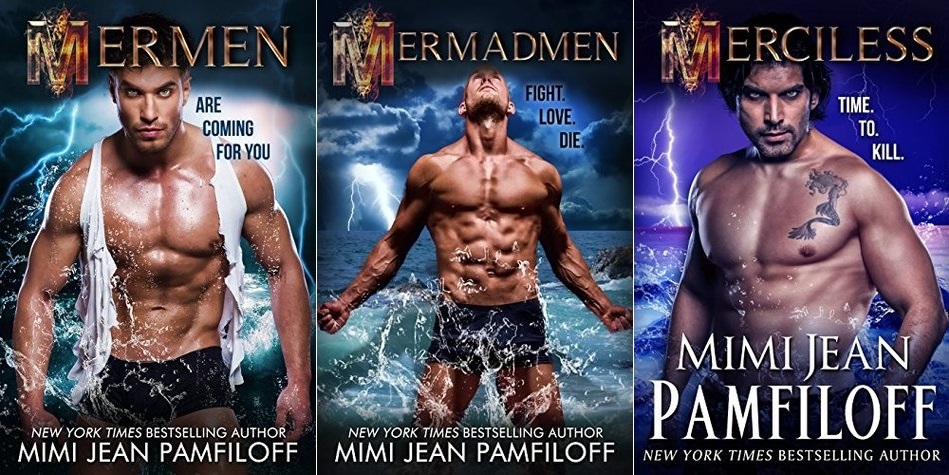 The Mermen trilogy by Mimi Jean Pamfiloff is unlike the typical fairytale story we often read. Those who love dark fantasy would find the story engaging! Packed with action and heart-wrenching decisions, readers will want to finish reading the books to find out how it ends.

These Mermen Don’t Have Tails, They’re Deadly as Hell, and They’ve Got Something He Wants…

INFAMOUS BACHELOR and SELF-MADE BILLIONAIRE ROEN DORAN IS A BASTARD. Yes, he knows it. And no, he doesn’t care. He’s got money and power, and he depends on no one. But when his estranged father dies, willing him a secret island, Roen will come face to face with an even bigger secret: its occupants. And these savage, sea-obsessed warriors are quick to make their position clear: Leave now or die.

There’s only one problem. Nobody tells Roen what to do. Ever. Oh, and one other thing. He’s just met the island’s other new “guest” and something about her brings out his possessive side.

SOLE SHIPWRECK SURVIVOR LIV STRATTON had been adrift at sea for ten grueling days when salvation miraculously appeared: an uncharted island. Only, the deceivingly beautiful men who live there aren’t interested in saving her. No, not at all. Because they somehow believe she is their property, a gift from the ocean to do with as they please. This is not good.

Her only hope? Billionaire Roen Doran, of all people. A man who’s said to care for nothing and no one. But if he’s so heartless, then why is he about to risk everything to help her?

In the island of El Corazon, there’re some creatures not quite humans yet not quite mermen – they’d lost their tail a long time ago but called themselves mermen, LOL. These beings were a bunch of fierce male warriors with the sole purpose to protect the island from the outside world.

I liked how the story unfolds. It didn’t feel like it being rushed, and I get to know the main characters’ background story. However, unlike the Immortal Matchmakers or the Accidentally yours series, the story wasn’t funny; it was dark and sad. Anyway, while reading it, I pictured the island as Mako mermaid’s island! I better off read the next book, for I can’t wait to find out what’s going to happen to Liv and Roen, and if her sister will get dragged into the trouble too since she’d consumed the water.

He never wanted this. He only wanted her.

EVERYTHING ABOUT THE ISLAND OF EL CORAZÓN IS WRONG. The men are ruthless warriors who call themselves mermen but don’t have any fish parts, the island isn’t exactly an island, and the women…well, let’s just say their story isn’t pretty. More like a nightmare. Which is exactly why billionaire Roen Doran will do anything to protect the woman he can’t live without from that violent place. Including becoming the island’s leader and giving her up forever.

WHEN LIV STRATTON ESCAPED THAT TERRIFYING ISLAND in the North Pacific after being shipwrecked, she didn’t just leave behind the horror, she left behind Roen Doran. A man she didn’t know, but who risked everything to save her. And now her heart can’t seem to move on. So part of her wonders if it’s somehow her fault she’s been taken against her will and locked inside a ship bound for El Corazón. But an even bigger part wonders if Roen will lift a finger to save her this time. After all, now he’s one of them…

Things got more intense in the second book. Liv tried to find a way to escape from Shane, who kidnapped her back to the island. But, no matter how hard she tried, nothing seemed to work, and just when she finally knew how the island works, she didn’t manage to voice up to Roen, and Roen ended up making another sacrifice again! When I finished reading this book, I kept on thinking about who the maid might be, and why did Roen have a connection with her? We knew it wasn’t Liv, so, who was she?

Liv Stratton has had enough of evil mermen and the psychotic living island they call home. She’s been kidnapped, caged, attacked by sea creatures, and nearly drowned. A nice small-town girl can only take so much.

But after beating the impossible odds, Liv is finally safe at home in Alaska, only to realize that everything she holds dearest in this world is still back on that crazy island. Possibly dead. And if she wants to know what has become of the man she loves and her sister, she’ll have to return and confront the one thing she’s been trying to get away from: the island herself. Only this time, Liv isn’t the same frightened human she once was. This time, they’ve messed with the wrong girl.

In this book, we read about Liv’s determination to save the species and her willingness to sacrifice herself, which was admirable. One thing boggled me was the letter she wrote to Roen, it never got mentioned, Roen should have seen it while they pack up to leave the island, then he should have noticed something was up. Maybe I missed it, anyway, it was a fun read and oh yeah, happy ending! Finally, after all the struggles and tests, this two deserved it! I feel like visiting El Corazon island now that it has changed.