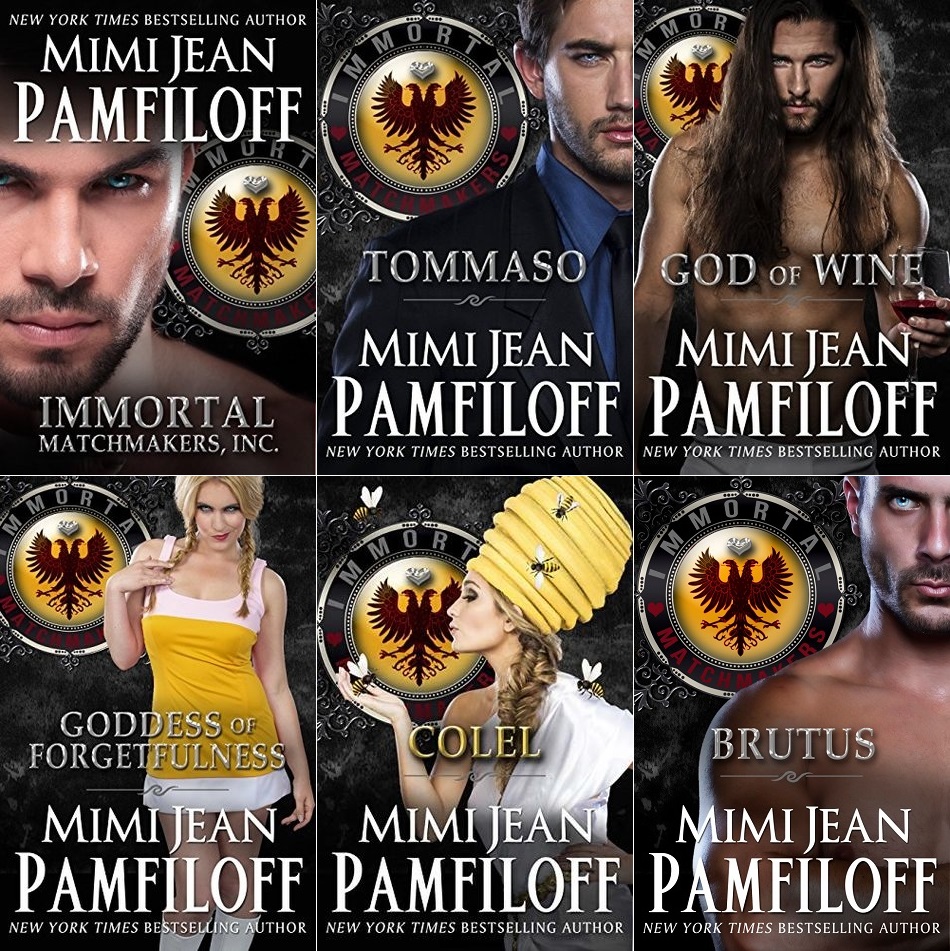 A continuation of the Accidentally Yours series, where Cimil and Zac must pay their penances by helping one hundred immortals to find their better half, this includes the other characters we’ve read from the previous story. The book in this series is stand-alone, and currently, there are only five books that have been published by the author, and in this post, I have listed it down according to the reading order.

Demigod Andrus Gray may look like every woman’s dream, but when it comes to charm, he sees no point in pretending: He has none and makes no apologies for it. Behaving nicely hasn’t made him the deadly assassin he is today. But is that really the reason he’s still single?

The Goddess Cimil—owner of Immortal Matchmakers, Inc.—thinks yes. So when she foresees a mate in Andrus’s near future, she’s determined to make the match happen. That means hiring aspiring actress Sadie Townsend to help the barbarian “act” a little more civilized.

But are seven days really enough? And why does he suddenly have the urge to throw away an eternity of love for just one night with Sadie?

I find Sadie quite entertaining; her inner conversation was funny. Andrus could not keep his pants on when he’s around Sadie, but he still has to see for himself this mate of her arranged by Cimil. Andrus’ decision was predictable, but the twist about Sadie was not what I expected!

Zac, the God of Temptation, also occasionally shows up in the story, and I can’t wait to read about him and his future mate. Will he be able to tempt Tula? Is she the one for him?

Tommaso Fierro is used to the finer things in life–nice suits, nice car, nice house. Okay, his past isn’t so nice, but that’s in the past. Or at least it was until he blacked out after meeting the woman of his dreams.

Annnd possibly terrorizing her before she got away.

Annnd discovering that he’s turning into a horrible creature he loathes with all his heart.

Luckily, there’s a cure. Unluckily, it will require him to track this woman down and convince her to give him a second chance. But if he finds her, will she ever believe that he’s really not a monster?

True statement by the bat-shit crazy goddess, there’re so many questions unanswered in this book; hence, I didn’t quite enjoy the story. I was more into Zac’s tale and couldn’t wait for him to find his better half. However, I still hope to get the answers to Tommaso’s story somewhere in the next book.

CAN ROCK-HARD ABS SAVE THE WORLD? HE SURE THINKS SO

Reckless and wild, the God of Wine has been partying for over ten thousand years. And New Year’s Eve, when humans around the world succumb to his naturally occurring spike in powers, is his biggest night. Only this year, things are a bit different.

A plague is sweeping the immortal community, and he’s turning downright evil. All those New Year’s bashes will turn into bloodbaths if he doesn’t stop the transformation. Sadly, the only known cure is finding a mate. Not so easy for a rude, beer-bellied mess who’s definitely not husband material.

But can a little gym time and help from the pros at Immortal Matchmakers, Inc., turn him into a divine sex machine? Absolutely!

So watch out, ladies! The God of Wine is lookin’ for love. And he has absolutely no clue what he’s doing.

God of Wine – Belch @ Acan was a funny character, while her mate – Margarita was a strong-headed woman who has a love-hate relationship with this young god. Sometimes I felt like slapping her to make her wake up, sacrifice herself for the sake of humanity, and thankfully everything works out. But one thing remains on the question of whether she will succumb to Belch’s request to make her immortal. I hope we will get the answer in the next book.

There’s not much progress with Zac’s story, and the ending in this book gave me a chill. What is going to happen with Tula, is Zac in the correct place, and how’s the story going to play out? So many questions and I can’t wait to find out more.

The Goddess of Forgetfulness has spent seventy thousand years wishing for a man to remember her for more than five seconds. But when her wish is finally granted, she’s appalled. Távas is cocky, handsome, and seven feet of rude muscled man. He can’t possibly be her mate! But all signs are pointing to yes. Okay, at least a strong maybe.

Is this some sort of cosmic dating error? She darn well hopes so.

Determined to discover the truth, she agrees to one date. Just one! But the night is about to reveal that his real identity is crazier and more alluring than she ever imagined.

Oopsie, what’s the goddess name in this book – Whatsherface? The DJ who played good music? Anyway, I loved her. She’s a much better character compared to the other goddesses, that’s including you Cimil! What you did to Zac and Tula wasn’t fair, poor couple. I wonder if Minky can pull some magic and make her visible. As usual, the side story captivated me more than the main story, and I can’t wait to find out Cimil’s fate and also my favourite couple Zac and Tula.

Colel, the Goddess of Bees, has been looking for Mr. Right for over seventy thousand years. So when she meets the hunky owner of a small-town flower shop and explodes with flutters and tingles, she’s almost certain that he’s the one.

Only two problems: her tiny black-and-yellow army suddenly won’t let her anywhere near him, and…is that a freaking epinephrine pen in the fridge? “Dear gods! He’s allergic to bees? Say it isn’t so.”

If simply dating the guy will kill him, how will she ever know for sure if he’s really the one?

Colel has a solution, but it’s drastic. Even for her. And what if he says no?

The crazy incompatible couple story continues again, this time we read about the mistress of bees with a guy who’s allergic to bees, and odd combination. Colel was the most bizarre goddess in the series, and I couldn’t picture myself meeting with her. I also wasn’t so sure on what would happen if she flipped, maybe I somehow missed the information.

As for the review on the whole series, I still don’t think that all the books are considered stand-alone, if you like the side story, and wanted to know about what happened to Cimil and Zac, then you’re still going to have to wait for the completion of the series. I do not know when the last book – Brutus will be published, Mimi said it would be early this year. I hope it will be soon; otherwise, I’ll forget the story. For the time being, I’ll read the Merman trilogy, which is also somehow related to this crazy world created by our talented writer, Mimi.

Will it be the last Immortal Matchmakers book? Possibly. I am going to let the gods and Minky (and my readers) decide. But it might be time to retire this series and do another spin-off I’ve been itching to get at. We shall see!