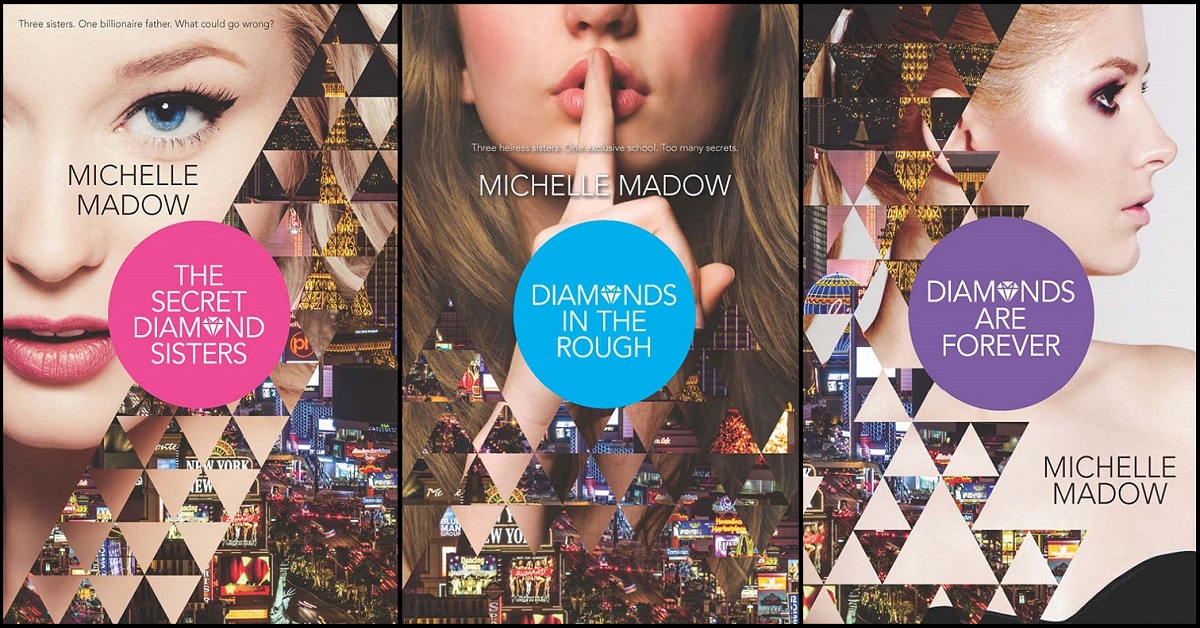 Savannah, Courtney and Peyton grew up not knowing their father was a billionaire. But, things are about to change. Can they survive the dramas that come with the glamorous lifestyle?

Three sisters. One billionaire father. What could go wrong?

The three sisters grew up not knowing their father and not quite catching a break. But it looks like their luck is about to change when they find out the secret identity of their long-lost dad — a billionaire Las Vegas hotel owner who wants them to come live in a gorgeous penthouse hotel suite.

Suddenly the Strip’s most exclusive clubs are all-access, and with an unlimited credit card each, it should be easier than ever to fit right in. But in a town full of secrets and illusion, fitting in is nothing compared to finding out the truth about their past.

When stories are told from different characters, alternating between the chapters, I sometimes find them monotonous in some books. But the Secret Diamond Sisters book is entirely the opposite. The characters come alive, with all four having distinct personalities enough for me to judge which one I like the most and one that’s annoying as hell.

In the story-wise, I never thought I’d enjoyed reading a story void of supernatural stuff since that’s what I usually read. But this book was entertaining, easy to read and full of dramas!

At first, I was only interested in discovering the truth about the Diamond sisters’ past and what could go wrong with having a title and wealth. But then, I found myself getting sucked into their glamour lifestyles and worried about them that I couldn’t stop reading the book.

What scene would Peyton, with her rebellious behaviour, cause next? Would Courtney be able to rein her feeling with her soon to be stepbrother? What challenges would Savannah, the sweet and naive girl, face next? How about the mean girl, Madison? What’s her plan for the Diamond sisters? Most importantly, what other secret gets revealed next?

Diamonds in the Rough

The three Diamond sisters survived the summer in style after coming to live with their long-lost billionaire father. But making a place for themselves at their exclusive new Las Vegas private school is throwing them any number of gold-plated curves.

Savannah’s YouTube stardom turns into a Sweet Sixteen reality show extravaganza–with complimentary enemies on the side. Dangerous flirtations don’t keep Peyton from a gamble that will risk far more than she planned to bet. And when Courtney and the sisters’ archenemy, Madison, uncover two explosive secrets, it will rock even this town of glittering illusion–and turn their lives upside down all over again.

The second book continues with more heated dramas and shocking revelations, and with the new development in the story has made this book much more fun and interesting to read. Some characters even turn out to be quite alright! You’ll know which character when you read it!

Have I mentioned before that I loved reading the campusbuzz forum? I even googled it. But of course, the Goodman high school didn’t exist! Anyway, please read this series if you love reading about high school stuff, best friends, families dramas, billionaire heiresses, forbidden romance and uncovering secrets. Off you go!

It’s cold outside, but the drama is hot!

The Diamond sisters jet to the mountains for spring break, and Savannah’s flirt-mance with an international pop star heats up as her pursuit of stardom succeeds. But is this romance meant to be, or has the right guy been in front of her all along? Meanwhile, Courtney takes the next step with her secret boyfriend–and future stepbrother–and as their parents’ wedding approaches, the pressure’s on to reveal their relationship.

Peyton’s figuring out a plan for her future, but she still feels guilty about getting her former bodyguard fired and wonders if she can get over him in the arms of someone else. But the biggest bombshell will change everything once again, because Madison’s ready to tell the huge secret she’s uncovered. And with the boy who betrayed her but who could be the love of her life fighting for his own life, she might need the Diamond sisters more than ever.

This book, Diamonds are Forever, is the last book in The Secret Diamond Sisters series. The adults no longer keep any secrets, and it’s time for the children to accept and forgive each other. Plus, they have their secret to spill and desire to conquer, and they may need every courage to do so!

While we’re in this final book, some characters continue to grow, and it makes you love them even more. But, I won’t nominate my favourite character as they were all likeable in the end! One thing is for sure, I especially loved the sweet and robust connection the sisters shared in the story. It’s admirable!