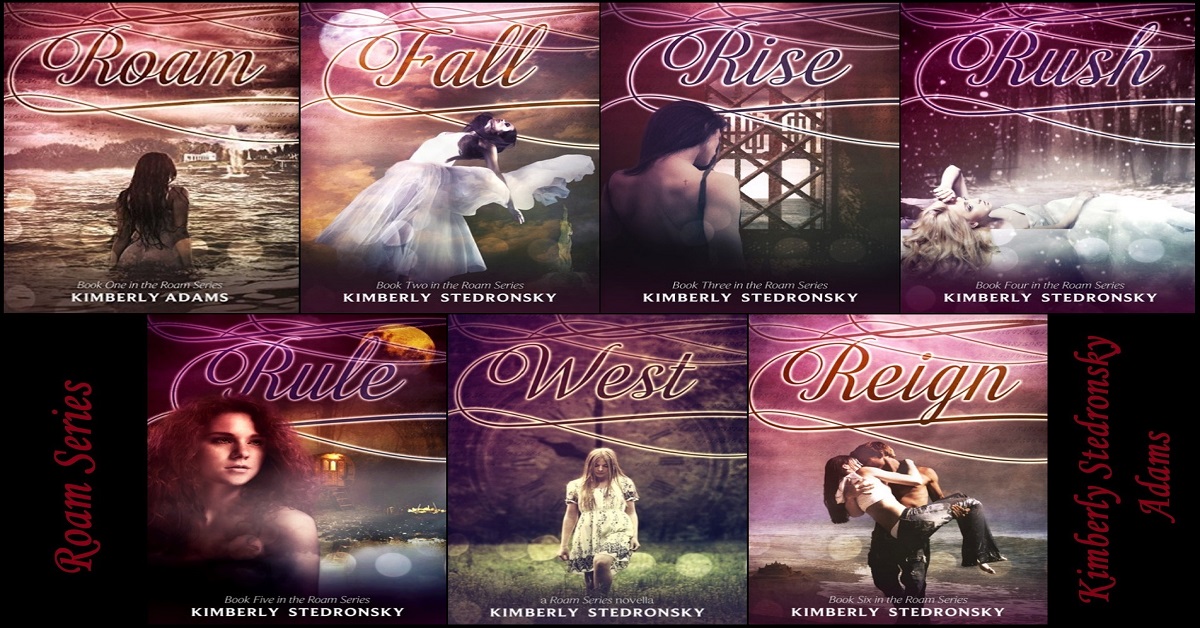 The fate of the world depends on the survival of Roam and her baby. Down with Roam’s final life, West would do anything in his power to set all things right.

On the first day of her senior year she meets the new history teacher, West Perry, and senses that there is something deep within her soul that remembers him… and a life they once shared.

Roam quickly learns that her fate is not as simple as she once believed. She has spent six lifetimes, as far back as the fifteenth century to as recently as the 1970s, struggling to survive a prophecy that has forsaken her… and the man that she has loved throughout time.

Evil is near, and now, in their last life together, West must protect Roam for the last time, save their unborn child… and in turn, save our world.

I liked the idea in the story – Immortal, time travel, past lives, prophecy and soul mate. But I’m not sure why I couldn’t connect with the characters and fully enjoy the story. Maybe because I was sick these past few days, 🤞 finger crossed, I’ll enjoy the rest of the books in the series!

After learning that her life’s purpose is to fulfill a prophecy to save our world, Roam finds that she is pregnant- and missing the love of her life with all of her heart. Logan, her best friend, stands by her, helping her to find a way back to West… despite his own love for her.

On a journey that will take her to another body and life in 1955 and, eventually, to another world, Roam will discover that before she can rise and protect our world and her child from an immortal evil… She must fall.

I enjoyed the story in this book more than the first one. You need to understand the concept of time travel in this book and the Tatoo coordinate thingy. Otherwise, it’s hard to follow the story. Honestly, it’s unlike any other book I’ve ever read before; it’s unique👍.

The parallel universe mentioned in this book is also fascinating. We get to visit Troy’s kingdom in the last few chapters, and it’s finished with a cliffhanger. What a messy life Roam has to live, especially at her young age! I wonder what’s going to happen next.

Is the story continuing in the ‘real world’ where West will have to care for Eva while the team finds a way to rescue Roam? Or, are we going to read about the suffering that Roam has to withstand in Troy’s kingdom? Who started the prophecy? Is it a fact that Eva is the key to it or Roam? There are still so many facts to be uncovered in the story.

Roam, imprisoned in an ancient land and left to the mercy of Troy’s cruel reign, longs for freedom, her child, and West.

Surviving with only Logan’s presence to save her from certain insanity, she turns to herself and finds that she alone possesses the strength and power to save her own life.

Deep within her soul, Roam remembers her timeless love for West and their child. Drawn together for the final battle, Roam and West cling to each other… and the promise of one last life…

Dramas, heartbreak, loves, friendship, family… So much is happening in this one book, and it’s a whole new level of awesomeness.

The story continues with Roam’s story in Icepond, and occasionally, we read about West and Eva. My heart broke for Roam in this third book. She has been through so much for a seventeen years old girl. Well, she would be nineteen in the real world, but time moves slowly in the parallel world.

One thing I find hard to believe is Troy’s ending. It couldn’t be that simple, could it? And since there are still a few more books left in the series, I wonder if he would rise again or if we’ll be reading about Logan, Violet and maybe Eva with Will😉?

Logan Rush had everything that he had ever wanted until the day his world was shaken by an ancient prophecy. Now, with the painful coordinates etched into his arm and nightmares convincing him to kill the girl that he loves, he struggles to redeem his immortal, evil soul.

Violet settles into his heart when he least expects her, giving him purpose and a reason to love again. Finally reunited after the horrors of the castle, they plan for their lives together as husband and wife. A stranger arrives, his intentions made clear as Logan is forced to acknowledge that his past is gone… But can never be forgotten.

This book is about Logan and Violet, written in their POVs. As I’ve read the books in the series continuously, I find myself skimming through the beginning of the book and only slowing down when I encounter some tidbits that weren’t included in the previous books.

It took half of the story (52%) before bringing us to the latest timelines. So, if it has been a while since you have read the story, it would be great to refresh your memory with the introduction.

Moving forward, I find the storylines in this book about Violet and Logan a bit boring. The enemy isn’t as dangerous as Troy. But, those who adore this couple may find HEA in this book. As for me, I’m more inclined to read about Eva now that she’s getting powerful. I can’t wait!

Since Eva’s birth, Will has done everything in his power to protect her from harm. Icepond, burning slowly from the overwhelming power of two suns, must turn to its king for survival.

Eva has known of the prophecy all of her life and understands the decision she must face. When Will comes to Eva as the sun threatens his kingdom and his people, asking her to live in Icepond, Eva demands that she be more than a savior to his world… she will settle for nothing less than queen.

The king of Icepond struggles to shield his heart from his own young, fiery queen, realizing what he has truly known from the moment he saved her infant life one cold, snowy night…

He was destined to love her.

West and Roam have dreaded this moment ever since Eva was born, the bringer of the sun. Eva needs to decide whether she would be helping Icepond or be selfish and condemn the world. It’s a no brainer choice since her brother’s life will be in jeopardy if Eva chooses to stay. So, to ensure things would run smoothly on the other side, she demands to be the queen, to rule besides Will, only in title or so she thought.

I think Eva deserves her own three books like her mother, Roam. Most of the time, Eva portrays as a whinny spoiled teenage brat. If she were to have a longer story, I believe we would enjoy reading her journey towards maturity and becoming a powerful witch.

WEST is a short Novella, told completely from West’s point of view, during the first book in the Roam Series.

I tried to resist her. She was smarter this time.

Nothing good could come of this, of her in my arms again, her breath on my lips, her body beneath me.

I knew what I needed to do. I knew what I had to do. Everything would be different this time, this seventh life, this last chance. I had a path… a remedy… a plan.

Until the moment I touched her again.

We get an insight into West’s life with Annie, Julie, and Roam in this short novella. The story alternates between the three of them. The moments they first met, the pregnancies, and the story end in West being trapped in 1977.

Julie is the wild one out of the three of them, and my favourite is surprisingly not Roam, but Annie. She was such a sweet and innocent girl, and I enjoyed reading her part of the story.

However, I was kind of disappointed because the rest of the girls did not appear in the story. I would have loved to read all of their stories.

Long ago, the betrothal of a beautiful princess to a young, powerful king was set to unite kingdoms for centuries. Mina and Troy, from the moment they touch, fall into a love that will eventually ignite a timeless vengeance between two worlds.

Roam, now a wife, mother, and warrior with memories never forgotten, is thrust into her ancient life with Troy. West, first knight to the king, and Logan, the king’s own brother, have fallen into the past… with no hope of return.

Sent back not only into this very first life, but also back into time, Roam, West, Logan, and Troy will realize that, from the very beginning…

They created their very own end.

The story continues after the last horrible cliffhanger where Eva sent her parents somewhere to make amends to the horrendous situation they faced in Icepond.

Thankfully, all hope is not lost, and in this final book, we get to understand the whole situation that led to the prophecy. Even the Villian had the opportunity to explain his action.

I liked how all the loose ends are tied up and the couples’ happy endings. It’s a very satisfying conclusion. However, I did not like what happened between Logan and Roam in the tower. I wish it did not happen, but I do not possess the time-travelling ability to voice this up to Kimberly!