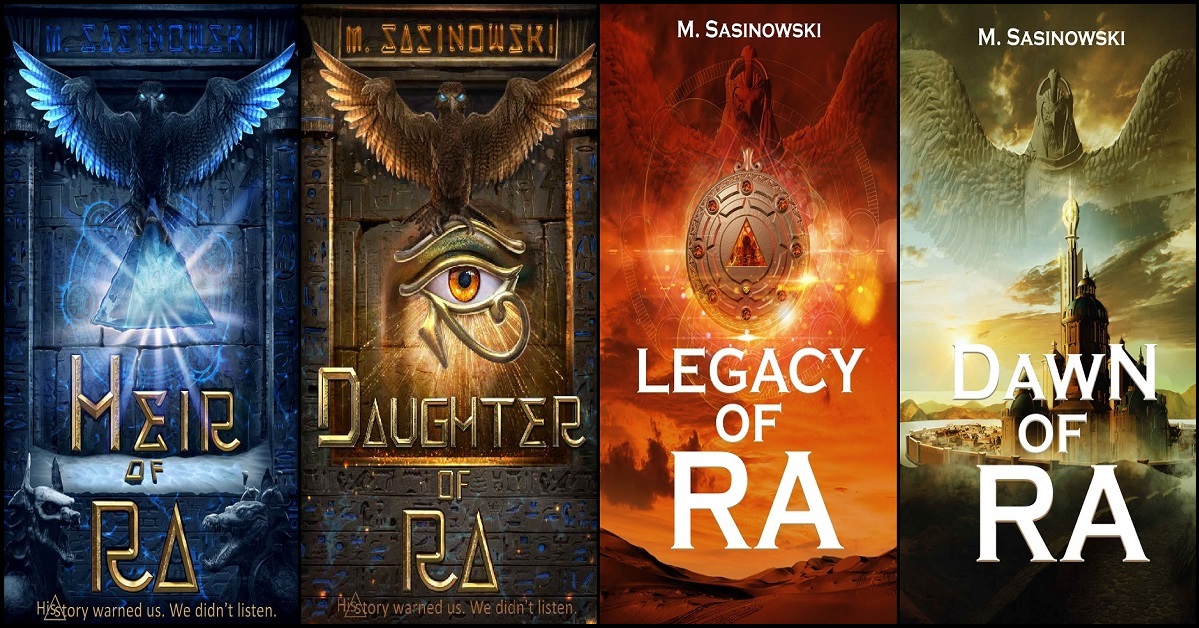 If you love reading about Ancient Egyptian deities, look no further and dive into Maciek Sasinowski’s Blood of Ra Series. These four books contain compelling stories of unwrapping the ancient mysteries blended with modern technologies with fast-paced and non-stop adventures.

TEN THOUSAND YEARS BENEATH THE SAND. TWO MYTHS ON A COLLISION COURSE.

An excavation of the fabled Hall of Records beneath the Sphinx unleashes an ancient disease that leaves Alyssa’s father fighting for his life.

As Alyssa races to find a cure, she stumbles upon a haunting artifact–and trespasses into the mind of an Egyptian god.

A global epidemic looms. Alyssa relives memories of an advanced race and unravels clues hidden within the relic, as she evades ruthless adversaries set on exploiting the power of the ancient genes. Then she makes a staggering discovery…

The world is not quite what it seems.

WILL YOU QUESTION YOUR ORIGIN?

Maciek Sasinowski has a way of capturing your attention and keeping it the whole time with its fast-paced storytelling. It contains a fantastic storyline with adventures, action-filled with nerve-wracking moments that make you wonder what would happen next.

What had me glued to the story and kept me turning the next page was the mystery held inside the pyramid-shaped crystal. I couldn’t wait to discover the whole secret. It was exciting, and I felt connected with the current covid-19 situation, the places/countries mentioned in the story, and my living in Egypt. I could easily envision the entire story in my head, just like Alyssa experiencing the memories with her VR helmet.

I was in Cusco, Peru, just before the worldwide lockdown for Covid-19 began. While I was living in Colombia during the voluntary evacuation, we flew to London before taking a train back to Manchester. While in the UK, we had the chance for a short holiday in Blackpool and stayed two nights in the Travelodge hotel. Currently, I live in Giza, about 25 minutes walking distance to the Pyramids, and of course, I visited the Sphinx two months ago!

In the heart-pounding sequel to M. Sasinowski’s award-winning Heir of Ra, Alyssa’s wit and resolve–and sanity–are put to the test once again.

Alyssa thought her fight was over. She was wrong.

Plagued by visions from the past, Alyssa struggles to discern myth from reality.

Desperate to uncover the truth about her ancestry and her mother’s tragic disappearance, Alyssa must reunite with old friends–and old foes–to discover that her only hope lies in a secret world, hidden in plain sight.

Another great story from the author, and I enjoyed this as much as the first one. From the Vltava river to the skyscraper buildings in Hong Kong, I never found dull moments once I started reading this book. The adventures keep piling up with more of the heart-stopping moments. I’m left wanting more!

The epic conclusion to the best-selling Blood of Ra Trilogy

The Rathadi, defeated and ravaged by illness, are in hiding.

Alyssa must awaken Horus’s last memory to unlock her potential and claim her birthright as his Legacy.

Can she overcome her greatest challenges and fears, both from outside and within, and lead the Rathadi to victory in their fight against Nephthys?

My goodness, the story is turning from better to fantastic! There’s an adrenaline rush adventure, the danger, the discovery, rescue operation, and to top it off, there’re twists and turns, which seriously caught me off guard.

But, I wouldn’t say that I liked the conclusion to the story. I’m a HEA seeker! The ending to this trilogy leaves room for a spin-off, and I’m not opposed to the idea! Whenever you’re ready, M. Sasinowski. As of now, I’m happy that we have another book, a prequel to this series, Dawn of Ra.

Millennia before Alyssa, Paul, and Tasha…

The ancient Rathadi and Pureans live side by side, sharing the island entrusted to their care. When the fragile peace between them is shattered, a young boy, exiled to a distant land, rises to become worshipped as the falcon-headed god.

This is how it all began.

The Rathadi and Pureans races come alive with information about their societies, cultures and politics, making this story compelling. It does make me believe that the two races exist in ancient history.

If you have yet to read the trilogy and plan to read it, you may skip the few pages on the front! It’s a summary of the three books. Those who have read the trilogy will get to read uninterrupted storytelling of the flashes of memories mentioned in the trilogy in this stand-alone book.

Those who did not read the trilogy will feel that the story was incomplete because it did not tell Horus’ complete life story. Information such as his army, wife, son, the destruction of the Atlantis, how his grandfather stored his memories, et cetera, was not mentioned in the story. Maybe we’ll get another book for this? Dusk of Ra?

I loved the relationship between Horus and Set the most in this story. It warmed my heart, but it’s just too bad that they have to be parted that way. Another thing I liked was the cover of the books in this series. It was absolutely gorgeous. I strongly recommend this series for those who love Egyptian mythology, adventures and fast-paced books.