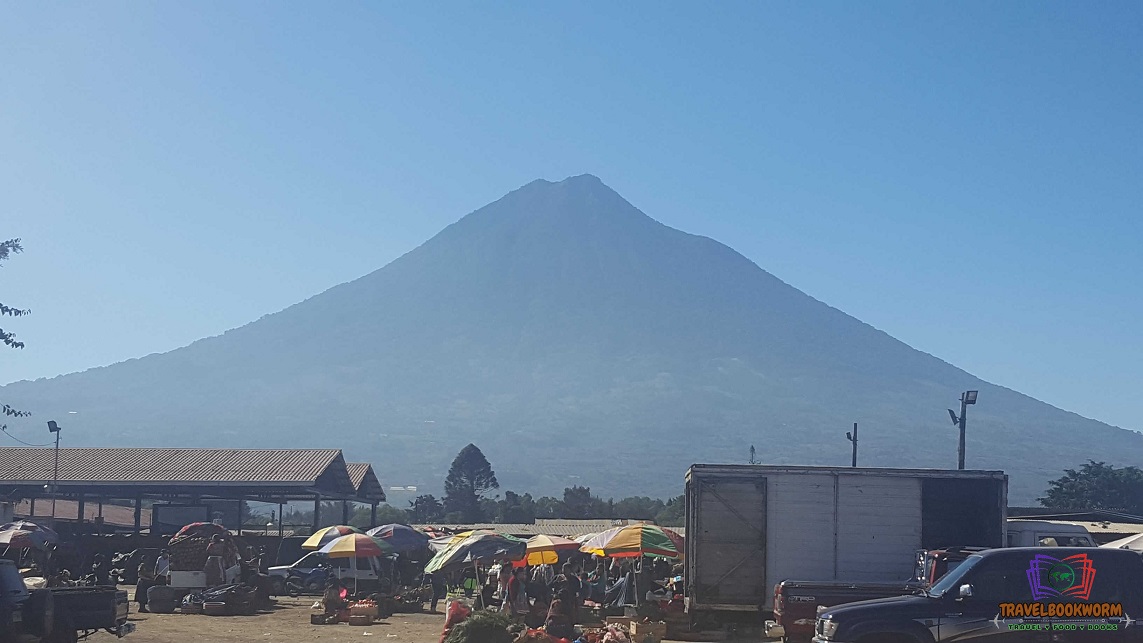 Founded on 10th March 1543 and declared as a world heritage site in 1976, Antigua is a place where one can enjoy exploring the beauty of an incredible number of restored colonial buildings as well as the old ruined. It used to be Guatemala’s capital city until the disaster happened, the Santa Marta earthquakes in 1773 had made Guatemala city its new capital city in 1776 until now.

If you fly from Mexico City to La Aurora International Airport, make sure to get the seat on the right side. The view of the volcanoes is fantastic! I wished someone has told us this information earlier before we board the plane. We could have bought the seats or at least request the airline to change it. The view on our side was mostly towns and jungle. However, just before the plane preparing for the landing gear, it made a slight turn, and I got the chance to appreciate the beauty even for a short while.

It didn’t take long at the immigration, and by 4:11 pm we started our 42km journey for the price of 40USD to Antigua. The traffic was quite heavy in town that it took an hour to get out of it, and once we got out, it was better, and the taxi driver turned to an F1 driver. He drove super fast navigating the narrowed and winding road, but he slowed down once we reached the old town with its cobblestones road. We stopped for a few times asking the local for help in locating the place we’re staying, and eventually at 5:45 pm we reached La Casa de Lulú.

The reception couldn’t speak English, and he took care of everything in the house including cleaning the room. There’s a shared kitchen in the house, but we didn’t use it. Our room was on the top floor, with spiral steel staircase to get to it. There’s no view in the room as both windows either facing the wall of the next house or the hallway.

However, in the bathroom, there’s a small opening hole facing outside, but it was too high to look outside. When I first see it, I was a bit worried about mosquitos getting in, but there weren’t any. During the day or night, the temperature was bearable in the room despite having no fan or air-conditioning.

Once we settle down, we headed out to look for ATM to withdraw money for the spending and pay for the accommodation. But locating one was difficult at night, and eventually, we found it after asking several locals for direction. It was inside a pharmacy shop near to the Cathedral Iglesia de la Merced.

Before heading back to the house, we stopped by at Sunshine Grill Pizzeria for meals and devoured the burger in record time because we’re both quite hungry as our last meal was breakfast at 10 am. The owner speaks English and Spanish she probably from Canada. The price for the two burgers and one mug of beer cost 100GTQ.

Earlier on while walking around to find the ATM, we walked past several restaurants including Chinese and Thai, but it was pricy, and besides, we’re too hungry to wait for them to prepare the dishes.

The next morning we had a cheap breakfast near the market in a stall called Malenita Mia Antojitos Guatemaltecos. It only cost 15GTQ for each meal that also came with coffee and Hot Chocolate. I had eggs and mike had stuffed chilli.

After breakfast, we walked around the town, and in the afternoon we had lunch at Cafe Colonial. Their Menú del Día (Menu of the Day) cost 66GTQ. We chose to have Pepian de Pollo. The meal was lovely, and we quite like the taste of it. The cafe was unique with the collection of gadgets from the olden day such as cameras, handphone and also toys car. All these precious things neatly placed decorating the walls on each side inside the cafe. The waitress wore a black and white uniform and served our food professionally.

In the late afternoon, we went to get Trev at La Brasa bar. The same problem happened to him which the taxi driver couldn’t find the house and Trev asked him to dropped him in a bar to use the internet and let us know where to meet him. In the evening we went to a local tienda called Cafeteria Jennifer and spent the night there until almost 10 pm.

The owner was friendly, in fact getting too close to us that when we ordered something, she didn’t immediately attend to us but busy playing with her phone. Nevertheless, we promised to come again tomorrow because it’s dirt cheap there. We spent only 385GTQ (£39) for two bottles of Whisky, one bottle of Ron Blanco, four bottles of 1L beer, two small bottles of beers, and three plates of fried meats which were tasty.

The Ayuntamiento has two minor museums. The Museo de Santiago and The Museo del Libro Antiguo.

In the olden days, the arch was built so that the nuns could walk between the two halves of the establishment without being exposed to the outside world.

This old ruin dated back in 1739, formerly a school then a royal customs house. This place can be visited from Monday to Sunday from 9 am to 5 pm for the price of US$4.

This old ruin took 16 years to complete starting from 1701, but disaster struck only months after it opened. The earthquake damaged most of the structure, and they rebuilt it again. However, when the Santa Marta earthquake happened in 1773, no restoration had been made ever since.

This old church located in 5a Calle Poniente, Antigua Guatemala, but it’s not open for the public.

Picture of the Cobblestones Streets

Mike and Trev went for breakfast the next morning, and I didn’t go with them because I was still full from last night’s meat feast. If I not mistaken, they said that the Malenita Mia Antojitos Guatemaltecos was closed, and they went to another place.

Last night we spoke to Jennifer about how much we loved Pepian de Pollo, and she told us that she could make it for us. So in the afternoon, as promised, we showed up at her cafeteria. It felt like eating a homecooked meal, and we’re grateful for that. It only cost us 85GTQ (£8.50) for three meals, with one bottle of beer and two Cokes.

After lunch, Mike went to buy bus tickets to Panajachel for tomorrow from Yellow House Hotel y Agencia de Viajes. The departure time was at 12:30noon and the ticket cost 75GTQ each. Trev also found his place to stay for tomorrow night since the house that we stayed fully booked, and he’s only joining us the next day in San Marcos.

At night which was the last night of the year 2018, we went out for drinks hopping, and Matthew joined us too. He had just arrived with his mate, Philip from the place where we’re heading tomorrow. At first, we couldn’t find the bar he wanted us to meet him, so we detoured to Antigua Brew and had four beers and one Limonada which cost 110GTQ while using the internet there to let him know about the failure. Matthew then set up a new place to meet up, Monoloco.

Some of the Food and Drink prices in Antigua Brewing Co.

They also have souvenirs up for sale:

We had a few drinks in Monoloco while catching up with Matthew and Philip before walking up to Cafeteria Jennifer. This time though, the bill for five of us was only 295GTQ (£29.50) for three plates of fried meats, one bottle of whisky (for Trev) and four bottles of beers. It was the last time we saw Jennifer because we left to Panajachel the next day. Trev stayed another night in Antigua before joining us in San Marcos on the 2nd January 2019, and Matthew and Philip continued their journey to Panama after Antigua.

Notes:
I’ve tried almost all of the ATM there to take money from my Maybank account, but it wouldn’t accept it even though the machine with MEPS logo. I’ve successfully taken money out from Colombia ATM before.