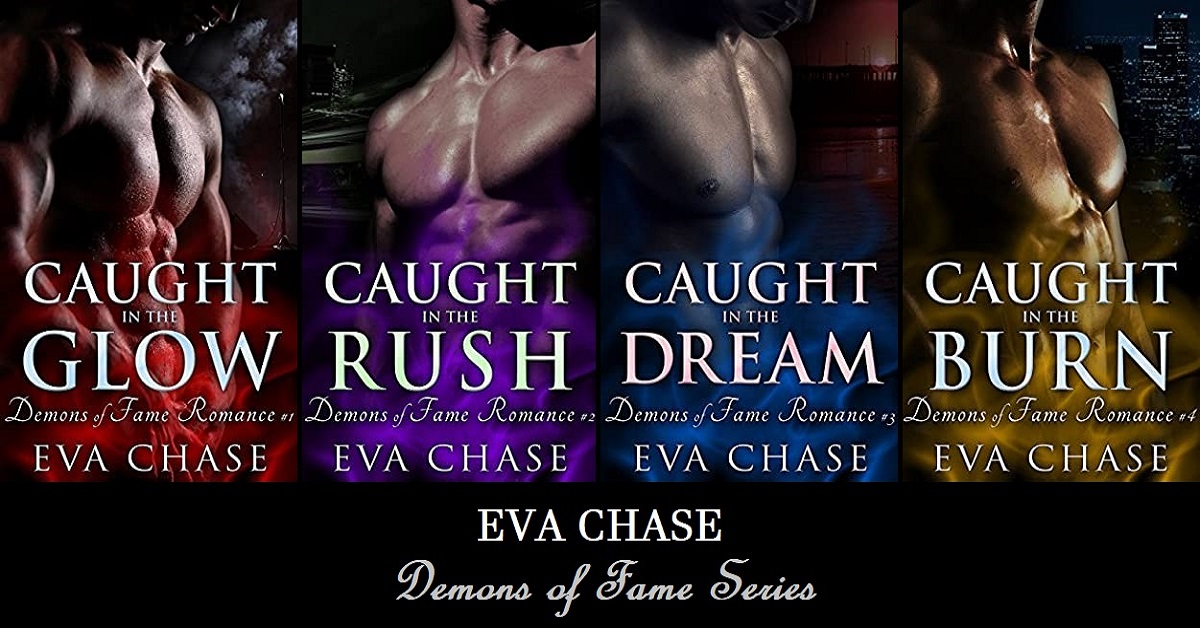 Glowers can fulfil your dream, but they’ll steal far more than your soul. Follow Avery, Fiona, Mateo & Sofie in their battle to protect their clients against the demons.

Formerly known as The Glower Chronicles, each book in this series contains a stand-alone romance, but it is recommended that you read them in order to best appreciate the ongoing subplots.

Caught in the Glow

When she was a child, Avery Harmen watched her father die at the hands of a Glower—a breed of demon that feeds on dreams of fame and glory. Now she secretly protects the rising stars of Los Angeles from the demons that prey on them, determined to make sure her clients never suffer the same fate.

Then Avery finds herself assigned to Colin Ryder, a young indie rocker who just landed a major label deal. Colin is cocky, rebellious, a brilliant musician, and already in the Glowers’ sights.

He’s also far too hot for Avery to ignore the chemistry between them—especially when she gets to know the tender side behind his celebrity facade.

Though Avery knows she’s falling too fast, she’s willing to risk heartbreak if fanning the flames of attraction distracts Colin from his Glower-tempting antics. But Colin is keeping a secret of his own, one so big it will put both her heart and his soul on the line.

Avery can see the Glower, demons who feast on human essence, targeting mainly the famous ones or rising stars. On her third assignment, Avery was assigned to protect a guy she knew for a brief moment in college. But it doesn’t make things any easier for her.

Avery tries her best to act professionally with her client. Still, she obviously can’t resist the temptation, especially with a guy like Colin Ryder. To succeed, she will have to break her principle, do some digging, and find out what troubled the young rising star before the demon marked her client.

The reader will bestow their blessing from the start, patiently waiting for the romance to blossom and wondering what secret Colin has to share and if Avery can protect Colin. At least, that’s what I feel about the book – A little mystery and romance. I wish to find out the Tether society’s purposes, work methods, how to protect the clients etc.

The story is a bit confusing in the beginning due to the slow introduction of society’s information. Other than that, my only complaint is that it needed to be longer for maximum closeness to the characters 😉.

Caught in the Rush

You can get lost in the rush…

Fiona Wilde has always lived up to her last name, but a night in the emergency room was more than she bargained for. Now six months clean and sober, she’s thrown herself back into the only job she feels qualified for—guarding the emerging stars of L.A. from the demonic Glowers—while getting the rush she craves from casual encounters, always leaving before anyone can leave her.

When her teen TV star client’s hot older brother Will arrives home for spring break, she sees the perfect opportunity for a fling with a built-in end date.

Then the Glowers launch an unexpected attack, leaving Fiona scrambling to keep her client safe even as Will steals past the walls around her heart. With the demons closing in and the starlet rebelling, the stability Fiona has clung to is slipping away. Her growing connection with Will might be the thing that saves her—or the thing that tears her apart.

We first read about Fiona as Avery’s best friend in the first book. The story’s timeline is six months after the event, where she was hospitalized due to a substance overdose. Now, Fiona has turned over a new leaf and continues working for the Tether society, protecting the rising teen TV star, Charity.

I find Fiona’s story much more entertaining. The demons are persistent and have revised their way of approaching their prey by tag-teamed with other demons, unlike the first book. Hence, Some scenes are much tenser and more serious. I can’t wait to read the other remaining book because I cannot get enough of the story; it is just too short!

Caught in the Dream

Mateo Jimenez is haunted by the death of his first girlfriend, and his fear of repeating past mistakes has cost him personal relationships and now his job. While his colleagues protect L.A. from the demonic Glowers, he’s been demoted to office work.

So when a Glower approaches him to negotiate a ceasefire, Mateo agrees to listen, planning to gather information on the demons that will prove his worth. He isn’t prepared to be so tempted by Kess, who uses her supernatural talents to bring his most buried desires to life.

As he struggles to keep the upper hand, he discovers he can provoke human emotions in the demon, but the more warmth and kindness Kess offers, the more confused his own feelings become.

No longer sure what’s an act and what’s real, Mateo sees a chance to stop the Glowers for good. But first, he must decide whether trusting Kess is the key to succeeding or the greatest betrayal he could ever commit.

This book is dedicated to Mateo. We were first introduced to him in the first book as Avery’s ex-boyfriend. However, the details were from Avery’s end, and even Avery and Fiona weren’t sure if he was finally over the relationship. In this book, we will get to read the reason for the breakup, his history, and his life challenges.

I like the way this book advances to the closure. We still get to read about the previous characters and read the latest news about them. Even though each book can be read individually, to get a complete understanding of the characters mentioned in the story, reading the previous books in order will give a nice touch of understanding the whole story.

I find Mateo’s story fascinating. His choice of partner is unique and had me constantly thinking about how he could make it work. By the end of the story, he clears the air between himself and Avery, and his relationship may be the solution to end the conflict between the Tether society and the Glower demons!

Caught in the Burn

Sofie Martel arrived in L.A. hoping to leave her past far behind her. She never expected to be recruited to protect the city from the demonic Glowers, but the Society has given her life new meaning. It doesn’t hurt that her current advisor, Shawn, is hotter than a summer wildfire.

As sparks fly between Sofie and Shawn, tensions are rising inside the Society. Sofie’s new friends want to work toward peace with the Glowers, but someone is sabotaging their attempts to reach a compromise.

Sofie agrees to act as a test case and let a Glower re-awaken her love for painting to ease her colleagues’ fears. She’s unprepared for the secrets her art-making unearths: secrets she’s keeping even from Shawn. With battle lines drawn and Sofie’s past snapping at her heels, the passion flaring between the two may light her way to safety—or burn everything she cares about to the ground.

We first read about Sofie from the third book as a newly recruited Tether who dated Mateo once. Currently, on her second assignment, she will have to prove her ability to Shawn, her hot advisor, who will evaluate her performance.

Will she make it to the end of her task without a hiccup? Especially when her past still haunts her. What will happen when Sofie accepts Mateo’s request to be their first test subject in collaboration with the demons?

The romance between Sofie and Shawn is sweet and slow-burn. Content-wise, they are straightforward. I mean, it’s not hard to guess who is responsible for disrupting the effort to collaborate with the demons 😉. Plus, we already know what it takes to settle the problem between the Tether and Glower, and this book is about clearing the air and sealing the deals. Overall, it’s still an enjoyable read.