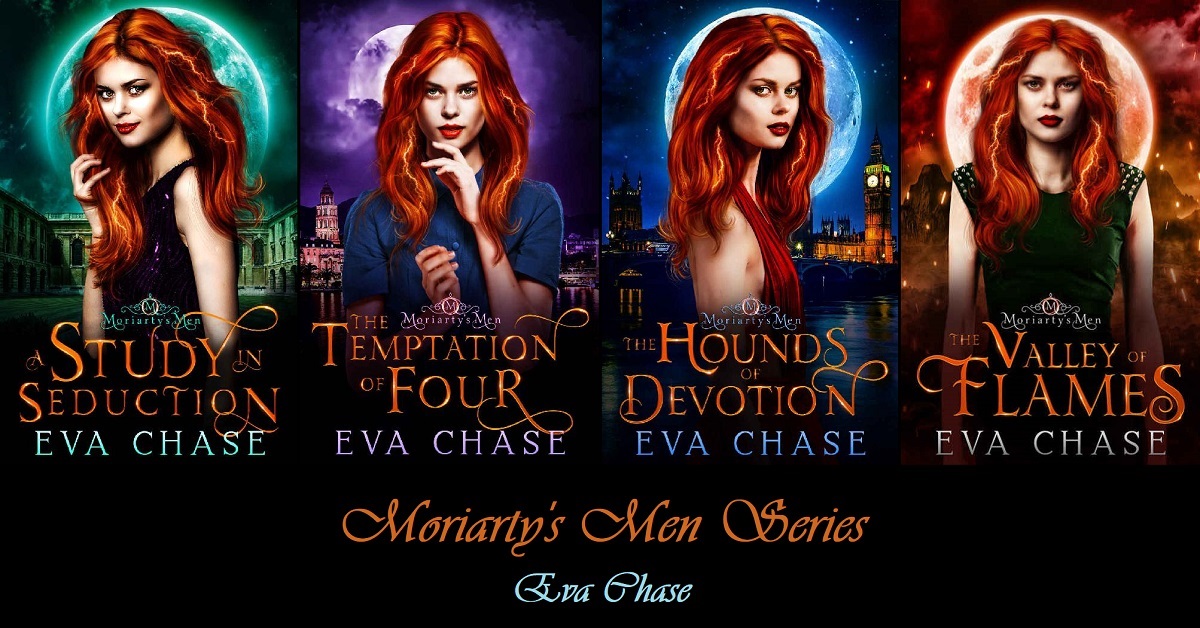 What if the infamous Professor Moriarty was a woman—and she met Sherlock Holmes and his colleagues as young men? Wits clash, and sparks fly in Moriarty’s Men. This reverse harem series comes with fast-burn steam, a slow-burn romance where the main character doesn’t have to choose, and M/M themes.

A Study in Seduction

My family expected me to play sacrificial lamb for their supernatural cult. Through a desperate bargain with a demonic fiend, I escaped—into a criminal underworld that saw me as easy prey.

I’ve proven them wrong thousand times over. These days, what I want, I get by whatever means necessary.

Now my fiendish friend is coming to collect its fee: my soul. I don’t intend to pay. Unfortunately, the key to my freedom lies just beyond my reach. To steal it before my time runs out, I’ll need to con the finest investigative minds in London into executing a perilous heist.

Sherlock Holmes. John Watson. Garrett Lestrade. Each at the top of their game; each with a weakness I can exploit. Each so passionate both in the field and between the sheets. I answer to no one, and I left my conscience behind years ago, but the more time I spend with them, the more the edges of my steeled heart soften.

We could rule the world if we worked together. But these men will never see the real me as anything but a villain. When the chips are down, I have to betray them—or I’ll lose myself to a greater horror than they could believe exists.

I never make a habit of reading a book’s blurb because I want to avoid getting any spoilers. But, it was a mistake not reading it for this book because, after a few chapters, it was still hard to follow. I wondered what Jemma’s motive for getting Sherlock Holmes, John Watson, and Garrett Lestrade on her side was and what the shrouded being was.

The introduction to the world was slow. I noticed the same pattern with some of the books by the author. Reaching the end of the story, I still have plenty of unanswered questions on the paranormal side. I wish to learn more about the shrouded beings, what they can offer, the cult’s history and Jemma’s life before she met the team.

The Temptation of Four

As the world’s foremost criminal mastermind, I take what I want when I want it. But my life is hardly a breeze, especially now that I’ve got the demonic fiend I just betrayed hot on my heels.

To be fair, I do still owe that fiend my soul. A small technicality I’m about to fix. I just have to track down the most secretive sect of the cult that tormented my childhood and steal the source of their power.

When Sherlock, John, and Garrett turn up to mess with my plans, I should probably be more annoyed. If only they didn’t present such a delicious challenge both in business and in bed. I used them before; I can use them again.

The trouble is, these brilliant, passionate men are wiser to my tricks now. And as our game of cat and mouse intensifies, so do the more tender feelings I’ve been trying to ignore.

With the battle lines drawn, which of us will give in to temptation first? Will we all survive the fallout?

This book, The Temptation of Four, is the second book in Moriarty’s Men Series. I didn’t really enjoy the first book because it took me a while to get into the world. But since I have a better idea now, the story is easier to digest, and the information given along the ride explains some of the questions I had from the previous book.

Now that the London trio has seen the horrible thing the cult did and also the shrouded beings, I look forward to reading about their brilliant collaboration to tackle the issue and hoping that more supernatural elements in the play as well. No more cat-and-mouse games, please.

The Hounds of Devotion

At long last, I’m free from the contract that promised my soul to the shrouded folk. Now I can get to work destroying every bit of influence the demonic fiends have in our world. As an added bonus, I’ve found myself with three unexpected allies who’ll help with that mission.

It’s certainly enjoyable having Sherlock, John, and Garrett around and on my side—both for strategizing and for other, more intimate pastimes. I can’t say I’m entirely at ease with our new friendly arrangement, though. Will they run when they discover just how brutal I can be? Will my growing affection for them dull the sharp edges I need if I’m going to see this mission through?

But when the shrouded folk discover my intentions, I may regret this alliance even more. The fiends aim to disrupt our plans by any means necessary, and that includes targeting the men I’m no longer sure I can stand to lose.

To be a functional team, they must be able to work together in harmony before they can take down the enemy. With only one book left, this book is just about it!

Because of the Shrouded folk’s influence, we learn about the London trio and Bash’s histories and how they accept their weakness, deal with jealousy, and get closer to Jemma. So, the story in this book is more towards self-discovery.

I enjoyed reading about them coping with the emotional battles and how Jemma expertly led the group. She was a bright and sensual character, and I loved this book because there were more supernatural elements in the play, just as I requested, and the cliffhanger was brutal!

But I couldn’t help but notice that Sherlock had only two chapters dedicated to him in this book. I want to know what’s going on in his brilliant brain when dealing with supernatural forces!

The Valley of Flames

To make up for my failure years ago, I’ll travel right into their hellish realm. I’ll sacrifice every happiness I’ve found and the men I’ve found it with. My life means nothing if I can’t see this mission through.

My men aren’t so willing to let me go, though, despite my past sins. And the game the shrouded folk are playing now has consequences that reach far beyond our little group. As the barriers between our world and theirs start to thin, will any of us make it out of this war alive?

The Valley of Flames is the final book in the series. To date, I’ve finished reading 12 of her completed series, and I can tell you that the ending to this one was predictable, always with the same aspect and goal as Chase’s previous RH series. At least on the romance side and the similarity of the leading female character’s strength and personality.

But, story-wise, it was one of a kind. By the way, Jemma made me think of Sorsha in the Flirting with Monsters series. They are both brilliant and sassy. On the other hand, I don’t see a strong sentiment linking Sherlock and John towards Jemma. She is better off with just Bash and Garrett.

Anyway, I enjoy the journey around the globe. The series first started in Europe before venturing to South America, Asia, and the Middle East and finished off where we first started. I also like that we get to visit the shrouded world and drag Sherlock, the sceptical, into the supernatural world. We rarely get to venture into both worlds in Eva Chase’s series. Well done, Chase!