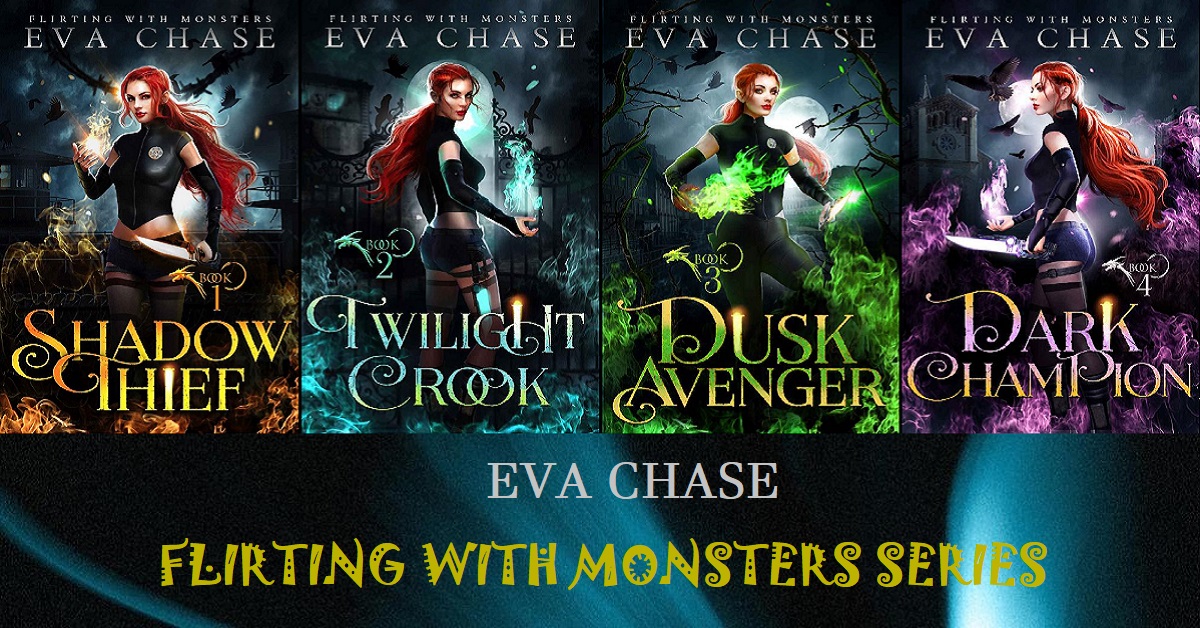 If you ❤️ kickass heroines with sass to spare, drool-worthy monsters with their own sense of morality, and steamy romances where there’ll be no choosing required, dive in now.

This sassy thief gets more trouble than she bargained for when three drool-worthy monsters follow her home and draw her into a conspiracy that threatens all supernatural kinds.

It was an ordinary job. Another night, another asshole collector of the supernatural. I free some poor little beasties from their cages, pocket a few trinkets to pay my bills, and burn the place down on my way out. Just call me the Robin Hood of monster emancipation.

I didn’t count on three manly monsters following me home like lost puppies. Stunningly hot lost puppies, but still. Now I’ve got a seductively cheeky incubus, a sweetly enthusiastic demon, and a grimly stoic angel camped out in my kitchen. They’re determined to repay me for my help, and they won’t get out of my apartment until they’re satisfied we’re even.

To be fair, they’ve got no place else to go. A covert band of hunters captured their boss, and the trail is ice-cold. I’ll lend a hand if it means I can send them packing… and when it looks like we’re up against the same creeps who murdered the person I loved most, you’d better believe I’m all in.

Track down the baddies.
Steal back the boss.
Don’t get killed along the way.
Oh, and maybe hook up with a monstrous hottie or two.
Piece of cake.

I’m so going to regret this.

Shadow Thief is the first book of the Flirting with Monsters series, and to be honest, when I was reading the early few chapters, I was lost. I thought I was reading a spin-off from some series. But it wasn’t in this case. It’s just that the introduction to this world came slightly late. Nevertheless, I immensely enjoyed the rollercoaster of our heroine’s life and her companions once I understood the world.

Sorsha Blaze is our main heroine; in this book, most POVs are from her. She is brave and mature, and her determination is her strength. Despite being ‘human’, Sorsha is not weak. Our heroine is like a saviour to the shadow creatures because she rescues and releases demons that the hunter trap—including her now pet dragon, Pickle.

Meanwhile, Ruse, Snap and Thorn are the male heroes. They are some of the lucky demons rescued by Sorsha. Since the release, they have been acting like bodyguards to Sorsha. The trio have different abilities and personalities, which are easy to differentiate. Ruse is the charmer, Snap is the curious one, and Thorn is the muscle. Some of their talents are yet to be revealed in this story.

Storywise, it turns out that these three and Sorsha share common enemies. The trio’s boss, Omen, was kidnapped by the same group of people that killed Sorsha’s parents and guardian. Hence, they work together as a team, investigating the whereabouts and planning a rescue mission—the story is filled with tense moments.

I’m excited to discover what will happens next, especially with the newcomer in the group, and since the newcomer has an issue with mortals, it will be an exciting read. But, the main problem would still be how to exterminate the highly organized group, and since the series has another three more books, what are the other discoveries, twists and turns or challenges Sorsha will face next?

What’s better than three monstrous hotties? How about four…

While helping the trio of sexy-as-sin monsters who followed me home, I lost my apartment, my sense of security, and more blood than was really healthy. Somehow my new lovers make me feel like I’ve gotten the better part of the bargain.

Unfortunately, their newly-rescued boss isn’t so keen on humans. I get the feeling he’d rather rend me limb from limb than give me the time of day. Too bad for him my mortal skills are just too useful to toss aside. After all, we’ve still got a conspiracy of monster-torturing psychos to destroy.

But between crushing Bossypants’s tests and tracking down dirt on our enemies, the most unsettling thing I’ve encountered might be what’s lurking under my skin. I contain powers no human is meant to wield. What does that make me?

I have no idea, but figuring out how to tap into my supernatural side may be my only chance to avenge the woman who raised me and so many who’ve been murdered since. And the one thing I am sure of?

This crook doesn’t back down.

The mission continues in this second book – to destroy and save the Shadowkinds captured by the well-organized group called the Company of Light. Sorsha and the trio have no problem working together, but it all changes after the arrival of Omen, the trio’s leader. Sorsha and Omen’s relationship is like a cat and dog.

Omen views Sorsha as a hindrance in the team and constantly challenges her, and Sorsha always accepts whatever Omen throw at her. But, when Omen realized something special in Sorsha, he pushed Sorsha to her limit just to prove his theory.

The objective remains the same, but the story is packed with many more actions, some dangerous missions, and new exciting team members joining the team, making the story more lively. I like how Sorsha slowly learns her ability, and we finally discover Snap’s true nature. But I don’t like the possibility of a new companion for Sorsha! Let’s hope it doesn’t come to that in the next book, and let’s hurry and rescue Snap!

A little pyromania can go a long way…

The Company of Light had already made my shit list before they kidnapped one of my monstrous lovers. Now? I’m ready to send the whole lot of them up in flames. Especially when it turns out they may have damaged my demon sweetheart beyond repair.

Trouble is, those flames aren’t playing nice. After its taste of freedom, my inner fire seems intent on having a full-on scorch party, and that includes burning me up while I’m burning down the baddies.

If I’m going to get a handle on the dangerous power within me, I need to understand where it—and I—came from. But finding the answers I’m searching for could be worse than staying in the dark.

My enemies are multiplying by the minute, and the worst of them… might be standing right beside me.

I have high hope for the series since I got the taste of an adrenaline rush from the many dangerous situations in the previous books. But this book has less action than the last two books.

The lack of a dangerous mission might be why I lost interest in this book. The only part I liked was the journey to uncover Sorsha’s heritage. But even that, the revelation was as expected! I hope the last book will satisfy me.

When life hands you demons, it’s time to make a little destruction.

I thought I wanted to know what I was. Now that I’ve discovered the answers aren’t so pretty, it turns out there are no take-backs.

The most powerful monsters in existence fear this one mortal thief. Unfortunately, that means they’re set on stamping out my existence. The demon who was my strongest ally has been caught in the middle, his freedom and his life on the line.

And that’s before we get into the genocidal psycho who’s about to unleash a catastrophe that could destroy both our worlds all by itself.

I have my work cut out for me, even with my monstrous lovers by my side. Can I become the champion of my darkness, or will it consume me instead?

Either way, it’s going to be one hell of a ride.

In this final book, we’ll see all the heroes try to atone for their past mistakes, which will help them build their confidence and have a nice closure. As for Sorsha, she will try her very best to tame the fire inside her and also avoid getting captured and killed by the Shadowkind’s highest authorities.

Honestly, I don’t find Sorsha’s story interesting enough. I may find it more exciting if she can travel to the shadowland. Since we often read about shadow creatures and the many types, I’m interested in discovering the beasts and what is on the other side. But I will continue reading Eva’s other Shadowkind series; hopefully, they will be more appealing. My next read will be The Heart of a Monster Series.

Before wrapping up the series, I always compared the similarity between the leading male character’s personalities in Eva’s series that I’ve finished reading. Here goes what I thought about the heroes’ first impressions or actions towards the heroines.