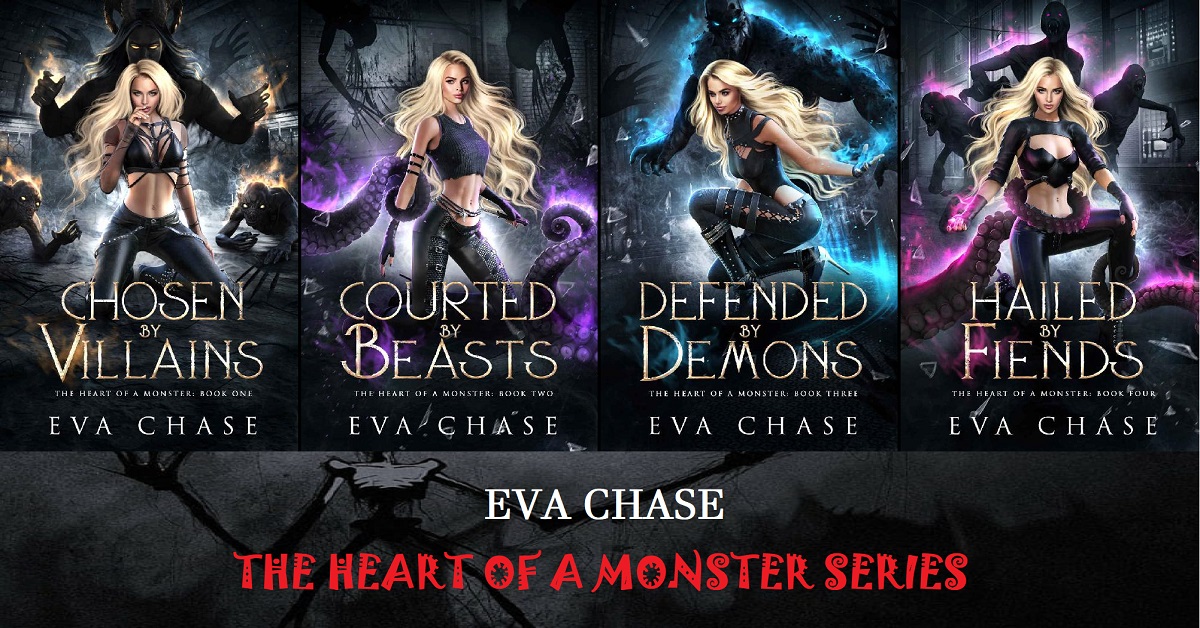 Nightmarish monsters are on the hunt for her. The objective will be to devour her heart. What’s so special about her heart, and can she outrun them?

Every beat of my heart is the tick of a time bomb, reminding me to squeeze as many thrills out of life as I can. Still, the last thing I expect is a horde of nightmarish monsters descending on me in the night, eager to tear me apart.

So when three more demonic figures leap out of the shadows to defend me, my choices are to trust my unexpected champions… or die. Not exactly a tough decision.

The beastly men wrench me away from my home, claiming they’ll keep me safe. They say there’s something special about me—something the others want to devour and they mean to protect.

My monstrous saviors are just as brutal as the creatures they fought off, damaged in ways I’ll never understand. I can tell they’re hiding things from me. But the more we dig into the mysteries surrounding my existence, the more I catch glimpses of tenderness beneath their vicious exteriors.

And the touch of their fangs and tentacles makes me feel so shockingly alive, it’s hard to remember why I ever feared them…

Until I discover the real reason they’re protecting me.

This book’s female character is very different from the last series I read, Flirting with Monsters. While Sorsha is sassy and independent, Quinn is weak and vulnerable, and I find it quite appealing because it’s something different this time, especially with her heart condition. She would be helpless, wouldn’t she?

But fear not because three monsters, Torrent, Lance and Crag, will help her through the difficult moments. If only they don’t have a hidden agenda. How will Quinn react when she finally learns the truth? If she leaves them, will she survive on her own to fend off the resilient monsters that keep trying to kill her? Why are they attacking her tho?

This series is based on the same Shadowkind world in the other Eva Chase series. It’s nice that the team from the Flirting with Monsters series make an appearance in the book. No matter how brief. We get to learn the latest news from them, and apparently, the timeline of this story is six years after the almost apocalypse event by Sorsha.

In this book, we will read about many different types of monsters, new heroes with hidden pasts, plenty of actions, and mysteries to solve. The ending of this book will make you dive into the next book immediately. Consider yourself warned!

Can you beat monsters without becoming one?

Despite our best efforts, my devoted monstrous men and I have fallen into the clutches of one of our most powerful enemies. But the demon strikes a deal with me—our safety in exchange for my cooperation in a mysterious scheme.

It turns out he wants me to tap into magical powers more vile than the brutality I’ve faced from his kind. With my family and the men I’ve fallen for on the line, playing along may be my only chance at survival.

But as we search for a way to win our freedom for good, the danger grows greater by the day. I’m running out of options.

To defeat the villains who want to claim me, will I have to turn into one myself?

They thought they could escape from Rollick and protect Quinn by themselves. But when the situation becomes dire, Quinn has to make a quick decision and agree to go with the devil to ensure the trio’s safety and her own.

While in captivity, the trio has limited time to be with Quinn and Rollick forces Quinn to learn how to use her power. However, she is one strong-headed person who refuses to embrace her sorcerer’s powers. Together with the trio, they devise another plan to escape. But, in the end, perhaps, the best option would be to stay.

The story in this book is more towards self-discovery for the Trio and Quinn. Quinn will learn about the trio’s past and her feelings towards each of them, and finally, make a difficult decision to ensure her lovers’ safety. The only person’s past or motive that has yet to be revealed is Rollick.

It still feels weird that the first thing in Quinn’s mind is to protect her newfound allies and not her parents, which in the end, bite her back when Rollick uses her parents to pressure her. Also, I will take that all the events, the discovery thingy, have motivated her, for she suddenly manages to do the one thing Rollick has wanted her to perform.

What will she discover on the other side of the ocean? Will it help her master her power or find out who the real villains are? Is the subsequent story void of the trio? I doubt it tho, but who knows… I just have to keep reading to find out.

Monstrous is as monstrous does…

I’ve finally accepted my fate. I can’t bury my head in the sand while vicious fiends threaten everything I care about.

Even if protecting the beastly men I love means committing a betrayal more brutal than anything they’ve ever done.

Even if getting a handle on my powers requires walking into the den of the most monstrous human beings I’ve ever known.

I’ll find the answers to defeating our enemies, whatever it takes. I’ll find my way back to the life I was supposed to have.

Or maybe I’ll die trying. But you’d better believe I’ll do everything in my power to take the worst of the villains down with me.

As predicted, the trio are only gone for a short time, and those who love Lance, Crag and Torrent will still be able to keep track of them, even in the shadow realm. Quinn and Rollick’s Norway trip may have been the tipping point in the battle against evil, for they learn how the sorcerer gains power, applies them, and Rollick also gets closer to Quinn.

Ever since the trip, I’ve been waiting for Quinn to get the trio’s essences too. But it never happens. I think it is a good idea for Quinn would be stronger, and she would also know what the trio senses and if they are in immediate danger.

One more book, and we will be done with the series. How the team will defeat the Leviathan is still a question. It seems impossible with Quinn’s condition and the evil’s immense power in his belt. But, if you follow the other Shadowkind series, Sorsha, in her final state of power display, could easily burn the villain down! I hope Quinn will join forces with Sorsha!

How many monsters does it take to stop the greatest villain of all?

I’ve let myself become more of a monster than I ever wanted to. Now the shadowkind are flocking to my side, eager to stand with me.

But I don’t know if I’m strong enough to foil the villain who’s put the whole world in his vicious sights. This borrowed heart might have given me my powers, but using them has rushed me toward my inevitable end.

I hate having to drag anyone else into this horrible battle with me… but if I can’t find a way to build up my new army—and fast—the world as we know it will disappear.

I always love the supernatural elements in Eva Chase’s books. It’s why I keep reading the series, even though I’m not keen on the reverse harem genre. But I’m determined to finish all the series she wrote, and I just have to put up with all the sex scenes, which in this book, there’re plenty! For instance, it didn’t stop Quinn, even with her failing heart!

Anyway, the conclusion is alright, but it could be better with more extended fighting scenes, dramas, twists, etc. because I couldn’t get enough of it in this book. The joint forces between the previous series’ characters and this one made me think that perhaps we will get to see Sorsha and Quinn in the Shadowblood Souls series?

Before wrapping up the series, I will compare the similarity between the leading male character’s personalities in the related series only. In this case, it’s the Shadowkind creatures. We have Omen, Thorn, Snap and Ruse in the Flirting with Monsters series and Rollick, Torrent, Lance, and Crag in The Heart of a Monster series.

Omen as Rollick for the leadership and as a late joiner and Snap as Lance for the playfulness and protectiveness is the most similar characters’ roles in both series. However, I couldn’t decide about the other four characters, but I think the best bet would be Thorn as Crag for their ability to fly and Ruse as Torrent for their uncertainty of feeling towards the female heroines.