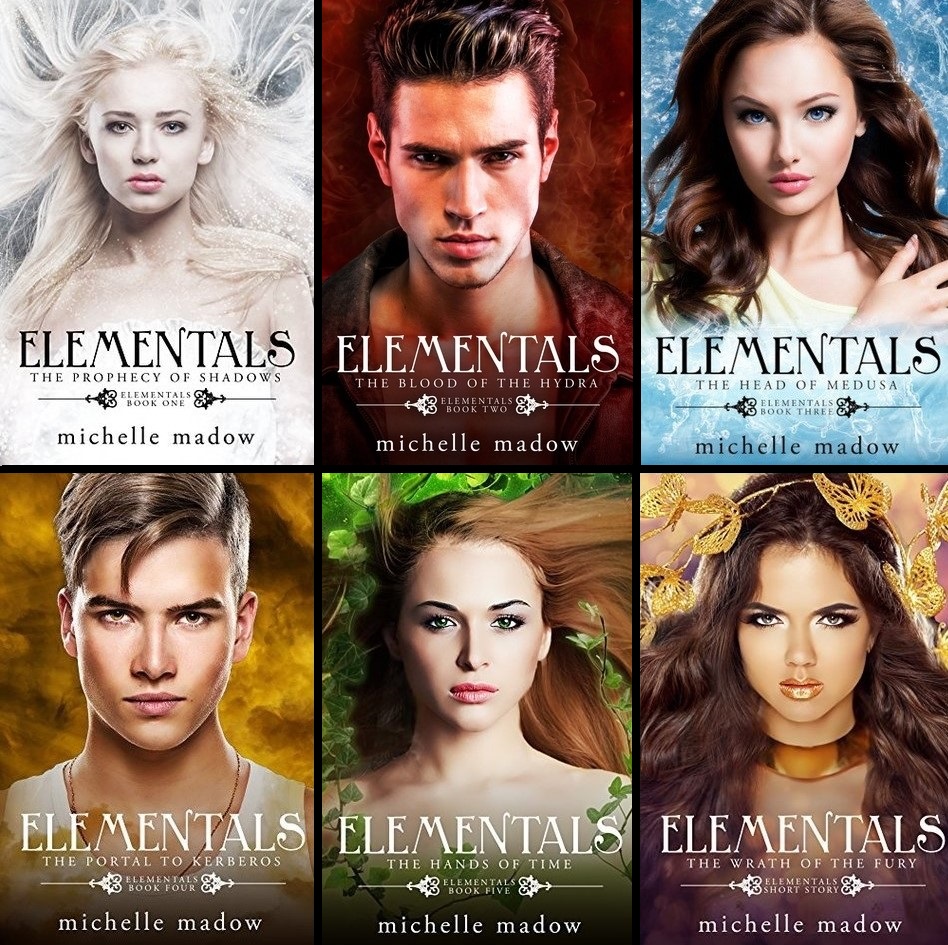 Nicole Cassidy is a witch descended from the Greek gods… but she doesn’t know it until she moves to a new town and discovers a dangerous world of magic and monsters that she never knew existed.

The Prophecy of Shadows

Witches are real. They’re descendants of the Greek gods.

Nicole Cassidy is a witch descended from the Greek gods… but she doesn’t know it until she moves to a new town and discovers a dangerous world of magic and monsters that she never knew existed.

When the Olympian Comet shoots through the sky for the first time in three thousand years, Nicole and four others — including mysterious bad-boy Blake — are gifted with elemental powers.

But the comet has another effect — it opens the portal to another dimension that has imprisoned the Titans for centuries. After an ancient monster escapes, it’s up to Nicole and the others to follow a cryptic prophecy in time to save the town… and possibly the world.

The story is fast-paced, stress-free, laces with some romance and paves with a fantastic adventure. Nicole, the main character in the story, is a fast learner, for she can control her magic quickly. So, this book isn’t for those who constantly complain about how easily the character adapted to the newfound role.

As for me, I enjoyed reading this first instalment because I like Greek Mythology, and I was fascinated by the fresh idea brought in this story. The part that I liked was when the adventure had started. It was hard for me to put down the book but read it until the end.

The Blood of the Hydra

A demigod who can kill with a touch. It’s an ability that must be kept secret from everyone, even from those trusted most.

Finding out that her new school had her in a special homeroom for witches was strange enough, but now Nicole must face the realization that she has the rare power to kill with just a touch.

It’s a secret she needs to keep not only from the Head Elders, but from the super-sexy witch Blake, who she’s had undeniable chemistry with even before he broke up with his long-term girlfriend, the vengeful witch Danielle.

Now Nicole and the four others gifted with powers over the elements, including Blake and Danielle, must stop a series of monsters that they previously believed to be dead from rising once again and destroying the mortal world. Three magical items are needed, including the blood of the slain hydra – ingredients that they must journey to the dangerous, mystical islands in Greece to retrieve.

The monsters they face on this journey will be more threatening than anything they’ve encountered yet. But with the fate of the world on their shoulders, it’s up to the Elementals to return home victorious.

Will they find the ingredients they need? Can Nicole and her friends pull off this mission while the tension between her, Blake, and Danielle threatens to ruin everything? And how long will it be until Nicole is forced to use her ability to kill in front of everyone, revealing the true darkness of her powers?

I got to say Danielle’s act of compassion was a pleasant surprise. I never thought it could happen because she’s such a bitch and bully. But for Kate and Chris, I already smelled something was brewing from the start!

The new characters’ appearance was a nice touch, especially Zeus, and the casual, nonchalant interaction between him and his children was cool. I can’t wait to read the moment when Nicole finally meets her dearest daddy, and I’m also looking forward to reading their next challenge!

The Head of Medusa

When Nicole Cassidy moved to a new town, she discovered that she was a witch descended from gods. But that was nothing compared to learning that it was up to her and four others with mysterious elemental powers to help save the world from the Titans, who would soon return to Earth.

Now her relationship with Blake — the fire Elemental — is finally heating up. But she must remain focused, because Typhon, one of the deadliest creatures in history, has escaped from the weakening prison world. Only one object can destroy him — the head of Medusa herself.

Follow the Elementals as they journey to the end of the Earth, facing choices that will put their lives and the entire world at risk. Will they all survive the mission? Find out in the riveting third book in the Elementals series, The Head of Medusa.

The five young Elementals: Nicole, Blake, Chris, Kate, and Danielle, faced yet another tough challenge in this book. While the adventures have been great, and I genuinely enjoyed reading them, the ending to this book, for me, was a tad bit sad. I felt hollow.

Those who haven’t read the previous two books need not worry because chapter one summarises what has happened so far, and by the end of the story, the score so far was team Titans 1 and team Olympians 1. Damn, I can’t wait to read the next book and hopefully, we’ll get to see the Olympians team on the winning side.

Also, I can’t stop thinking and speculating why Apollo hasn’t shown his face yet. Could it be the team travelling back in time to save their fallen member, and during that time, Apollo has done something to save Nicole’s life, and as a result, he hasn’t been able to meet Nicole in the current timeline? 🤔 I never practice reading the following book’s blurb in the series or any other series 👌.(I got this idea from watching the Lucifer series on Netflix 😄).

She will venture into hell to save the one she loves.

After being betrayed by one of their own, Nicole watches helplessly as Blake is snatched into the prison world of Kerberos—along with Medusa’s head, which is the one item they need to stop the Titans from rising again.

Now Nicole and the other Elementals must enter the portal, find Blake, and bring him and Medusa’s head back to Earth before the deadly monster Typhon returns and wreaks havoc on the world.

But there’s one catch—their elemental powers don’t work in Kerberos. In a dimension designed to make those within it lose touch with reality, and that’s filled with dangerous creatures who want to stop them from completing their task, will they make it out alive?

In this penultimate book of Nicole’s story, join the Elementals as they journey through hell to save the world… before it’s too late.

Wow, what an adventure the team faced in the story. It’s by far the most challenging and dangerous one. With three of the remaining team members, they march into another dimension in the hope to save Blake and also retrieves the vital piece of tool to defeat Typhon.

In this story, Danielle surprised me with her mature act and pleasant personality, and she quickly turned into a likeable character! I would love her to have her happy ending with the primordial god!

I love that the author never fails to introduce us to other Gods or Goddesses in every book. She includes and describes almost all Olympian deities in the story, which shows the author is well-versed in Greek Mythology.

By the way, it turned out I was overthinking about Apollo’s reason for not meeting with Nicole immediately, and the reason for it wasn’t what I thought it would be, but much simpler than that 😄

The Hands of Time

Time is running out. War will be waged. Sacrifices will be made.

Months ago, Nicole Cassidy’s life was turned upside-down when she discovered that she was a witch descended from the Greek gods. She and the four other witches gifted with elemental powers fought all over the world—and in another dimension—to battle the supporters of the Titans and fight for the people they love.

Now the Elementals must stop Typhon—the most dangerous monster in the world—from rising, and seal the portal to the dangerous prison world of Kerberos. But they won’t be able to do that without facing their hardest decision yet… a sacrifice so great that it may be one they’re not willing to make.

Start reading this series if you want to read a series that’s easy to digest, fast-paced, contains magics, adventures, battles, heartache, sacrifices, betrayal, and romance. My only disappointment with this series is the length of each book. It’s too short to my liking.

By the way, did they release the souls of Medusa’s victims? I know they said they would do it after they closed the portal. That’s another topic Michelle should have included since this final book is so short. On the other hand, I wonder what’s the short novella is about. As usual, I won’t read the blurb because I want it to be a surprise 😄.

The Wrath of the Fury

Everything changed on the night of the Olympian Comet.

I’ve always known that I’m a witch. But I didn’t expect to discover that I have a mysterious power unheard of amongst my kind. My best friend Garrett — who I’ve secretly been wanting to become more than a friend — has one of these powers too.

We know something big is going on. But we didn’t realize that there are ancient creatures searching for us, and that they’ll kill us for what we are…

Just when I was getting the hang of these new characters, it was over! My seat wasn’t even warm yet. Frustration that’s what I felt when I finished reading this short novella. I need it to be a little longer because it’s kind of bad leaving Kayla like that. I thought they were supposed to be best friends! Also, now I’ll never know Sydney and Garrett’s adventure since the main stories weren’t about them.

Ignore my rambling. That’s just me being melodramatic, having a hard time accepting that it’s finally over. Elementals series was the first series that I read from the author, and I enjoyed the story. Hence, I checked out the first book’s blurb on her other series, and I liked what I read. You have my support, Michelle, and I’ll start reading them soon!