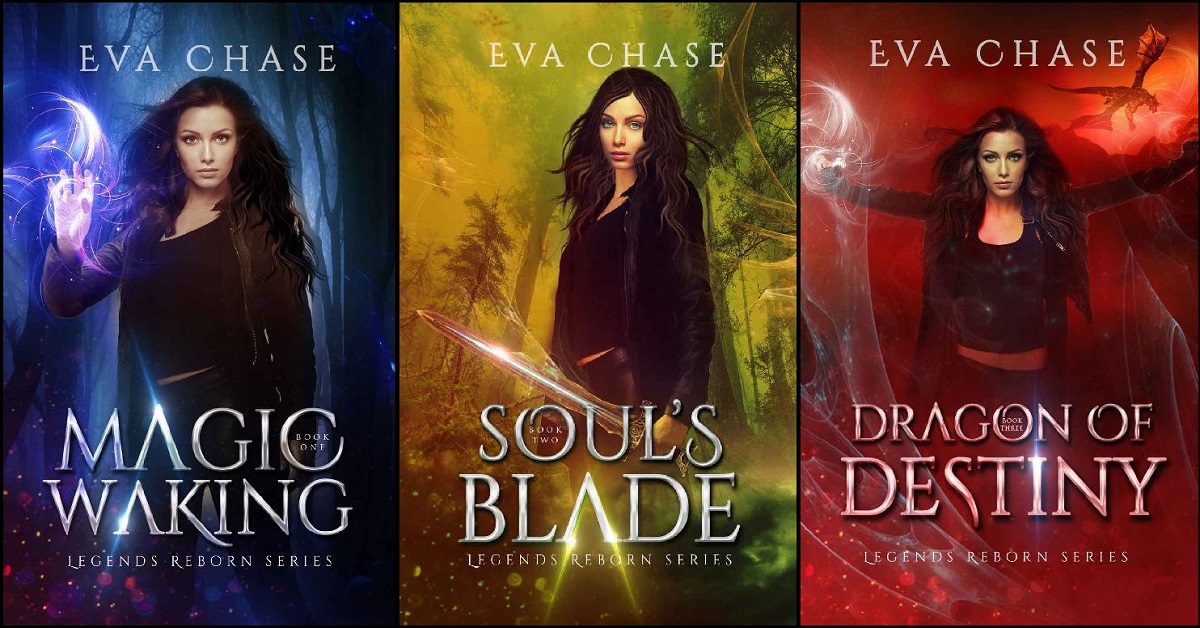 Reborn wizard Emma Hale has three goals in life, or rather lives: Track down the present incarnation of the legendary King Arthur, fend off the shadow creatures that hound him for as long as she can, and break the spell that binds their souls in this morbid cycle.

If only she had a better idea how she’d cast that spell in the first place. And if only Arthur’s current host wasn’t so cocky yet distractingly good-looking. Because Emma is falling even harder for the man she can’t have.

When a fae mercenary with power to rival Emma’s puts her king in his sights, Emma burns through all her tricks just to stay one step ahead. Now her only chance is to find some way to destroy the mercenary before he and his army of dark forces destroy Arthur.

No human Emma’s ever known has managed to kill a fae. But if she can’t, and quickly, this death might be their last.

Once upon a time, there was a wizard named Merlin whose purpose was to serve and protect King Arthur. Long story short, Merlin sealed the greatest dark fae away and cast a spell that bound him and King Arthur’s soul. For 1,500 years, through many reincarnations, Merlin has been searching for a way to break the spell while also trying to stay alive before the dark fae’s minion kills them both, again.

Present day, Merlin was born as a female named Emmaline, and the king as Darton. Both of them are college students. Meanwhile, the dark fae is getting stronger and might escape with the help of her minions. Maybe, it’s time for Emma to accept help from the others instead of working alone to ensure their survival.

After binged reading five of Eva’s reverse harem series, it’s nice to have a break and with just one love interest! Currently, the Legends Reborn series is one of the only two series that’s not in that genre.

It was a bit slow at the beginning with all the casting spells act and stalking Darton etc., but when I reached around forty per cent, things got exciting, and by the time I got to fifty per cent, I couldn’t put the book down. I always loved it when ordinary humans got involved in the supernatural world!

The story told in this book is nerve-wracking, and I love the scene starting from the auditorium with the gloom until the end of the story! It was thrilling, and I could easily imagine the whole scene while reading the story. I can’t wait to read the next book!

Find the magic sword or die. Just another day in a reincarnated wizard’s life…

After being chased across the country by a faerie mercenary, reborn wizard Emma Hale is shocked she’s still alive. But victory doesn’t mean she can slack off on her mission to protect the current incarnation of her liege and sometimes lover, the legendary King Arthur.

Now that Arthur’s soul is awakening, every creature of darkness in a thousand-mile radius is slavering for a taste. Worse, a merciless adversary from Emma’s past has reappeared, leaving Emma scrambling to save not only her king but all their loved ones as well.

Surviving the week may depend on a blade only Arthur can wield. Too bad Emma lost it centuries ago on the other side of an ocean. And any quest to retrieve it will unearth secrets Emma isn’t yet prepared to face—secrets that could destroy her and her king before their enemies even have the chance.

I’ve been reading books with many POVs recently, and I wish that Darton has his POV in this series. So far, it has all been from Emmaline. Anyway, this second book did not have as much action as the first one and not many involvements from their human friends. The happy twist in the story made up for that tho.

However, Britain’s Fae hunters being quite receptive was a bit of a letdown because I wouldn’t mind reading their resistance or scepticism since Emma did not provide them with many details. I also wished she had told the US Fae hunters about being Merlin and King Arthur! That would blow their minds off!

Overall, it’s still an enjoyable story, and I look forward to reading the last book in the series! Will Emma and Darton be free from the repetitive cycle of life by killing the Darkest one once and for all? Will they have a chance to at least enjoy their one last life together?

Kill the king to save the world? Not on this wizard’s watch…

Reborn wizard Emma Hale hadn’t thought she could make a bigger mess of her life—and that of her liege and sometimes lover, the legendary King Arthur. Turns out she was wrong. With the greatest of the dark fae roaming free and the spell that preserved Arthur’s soul broken, it’ll only take one misstep for her to lose him forever.

Keeping her balance is no easy feat. Thanks to the oath Emma took in exchange for the light fae’s help, the closer the Darkest One comes, the more Emma has to fight the compulsion to end Arthur’s life before their enemy can. Then there’s the matter of the darkness lurking inside her king’s soul—a curse laid centuries ago that could turn Arthur into the dark fae’s deadliest weapon.

So yeah, this wizard has a lot on her plate. With the clock ticking down toward global disaster, the choice may come down to saving the world or saving her king. But how can Emma give up on either?

After countless tiring reincarnations over the 1500 years, Merlin and King Arthur finally get to end their curse and hopefully finishes the powerful darkest one. The only problem against them is time.

This final book is definitely engaging compared to the previous two books. Emma’s continuous effort in trying everything in her power to fix the issue and the hopeless situation wrenched my heart, and as more and more problems surfaced, I had no idea how she would make it to the end.

I’m glad the conclusion is one happy ending tho. Honestly, I thought the methods Emma and Darton use is only effective when one is dead. But apparently, the rules bend in their favour. It’s a very unbelievable ending with so many efforts thrown in for the satisfying end.