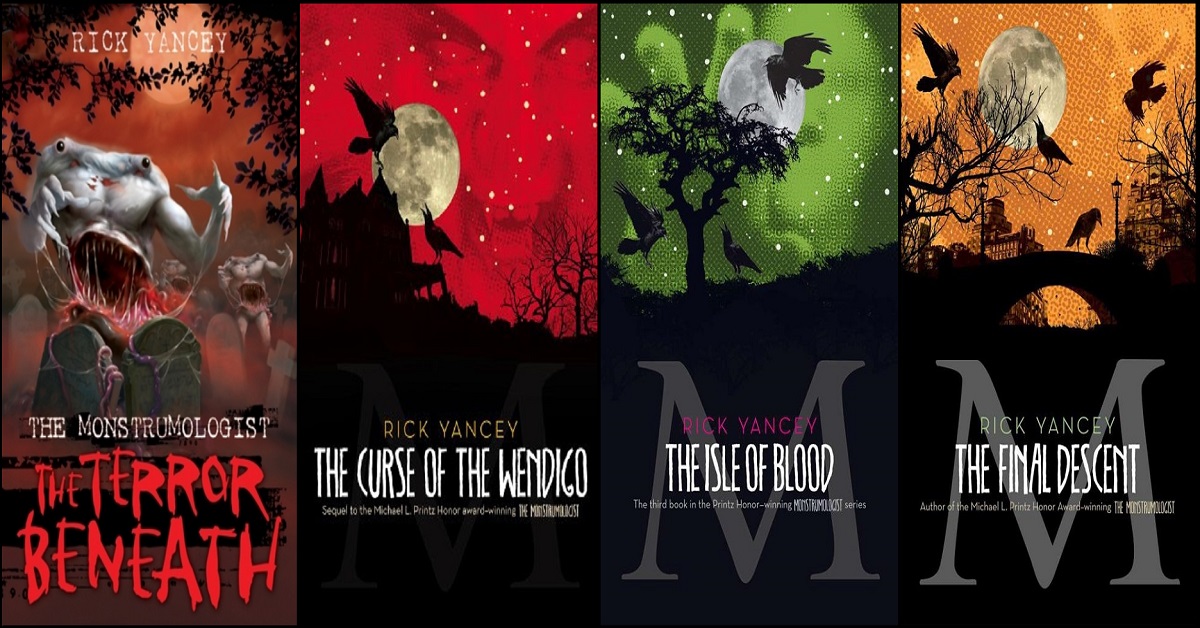 Monsters are real, and Will Henry made himself indispensable to Dr Warthrop Pellinore. Read through this young apprentice’s journal of vivid descriptions of the beast he encounters throughout his service.

Will Henry is an assistant to a doctor with a most unusual speciality: monster hunting! In the short time he has lived with the doctor, Will has grown used to late night callers and dangerous business.

But when one visitor comes with the body of a young girl and the monster that was feeding on her, Will’s world changes forever. The doctor has discovered a baby Anthropophagi – a headless monster that feeds through the mouthfuls of teeth in its chest – and it signals a growing number of Anthropophagi.

Now, Will and the doctor must face the horror threatening to consume our world and find the rest of the monsters before it is too late…

Compared to the 5th wave series and Alfred Cropp, this one is unique! The narrative style changed drastically to accommodate the setting, and it almost feels like this book was written by another writer who lived through the era. Maybe the author was indeed Will Henry?

Will Henry’s life story is fascinating to read, but I do not wish to be in his shoes. Listening to Warthrop constantly yelling at him every second, not to mention everything must be done in a second with the command words – Snap to! It’s very stressful.

Anyway, I find the choice of words used in the story quite challenging for a non-native speaker like me. However, I gladly read it because I get to learn new words, and it’s easier with my trusty Kindle.

The Curse of the Wendigo

While attempting to disprove that Homo vampiris, the vampire, could exist, Dr. Warthrop is asked by his former fiance to rescue her husband from the Wendigo, a creature that starves even as it gorges itself on human flesh, which has snatched him in the Canadian wilderness.

Although Warthrop also considers the Wendigo to be fictitious, he relents and rescues her husband from death and starvation, and then sees the man transform into a Wendigo. Can the doctor and Will Henry hunt down the ultimate predator, who, like the legendary vampire, is neither living nor dead, whose hunger for human flesh is never satisfied?

This second book in The Monstrumologist series explores the line between myth and reality, love and hate, genius and madness.

I loved the part where they ventured into the wilderness searching for the missing friend. The difficulty they faced in the adventure was nerve-wracking. It’s just too bad that there’s no monster at all in the end. Thus, I prefer the first book to this.

Back to the part about the author’s identity, can they not check with the doctors, nurses or the reader about whether they notice the deceased have any scars on the neck, arm or chest? I really wish that Will Henry was the author! It’s just my wishful thinking 😂.

The Isle of Blood

When Dr. Warthrop goes hunting for the “Holy Grail of Monstrumology” with his eager new assistant, Arkwright, he leaves Will Henry in Victorian New York. Finally, Will can enjoy something that always seemed out of reach: a normal life with a real family. But part of Will can’t let go of Dr. Warthrop, and when Arkwright returns, claiming that the doctor is dead, Will is devastated—and not convinced.

Determined to discover the truth, Will travels to London, knowing that if he succeeds, he will be plunging into depths of horror worse than anything he has experienced so far. His journey takes him to Socotra, the Isle of Blood, where human beings are used to make nests and blood rains from the sky—and puts Will Henry’s loyalty to the ultimate test.

My heart broke for Will Henry in this book. He has the most loyal heart, and he loves his master to bits. I just hope to read Warthrop showing more of his gratitude towards him in the last book.

Storywise, as usual, I love reading about their adventures, travelling from one country to another. But it feels wrong to read about a thirteen boy ending someone’s life without remorse! What have you become, Will Henry?

Will Henry and Dr. Warthrop have encountered many horrors together—but can Will endure a monstrumological terror without his mentor?

Will Henry has been through more that seems possible for a boy of fourteen. He’s been on the brink of death on more than one occasion, he has gazed into hell—and hell has stared back at him, and known his face. But through it all, Dr. Warthrop has been at his side.

When Dr. Warthrop fears that Will’s loyalties may be shifting, he turns on Will with a fury, determined to reclaim his young apprentice’s devotion. And so Will must face one of the most horrific creatures of his monstrumology career—and he must face it alone.

Over the course of one day, Will’s life—and Pellinor Warthrop’s destiny—will lie in balance. In the terrifying depths of the Monstrumarium, they will face a monster more terrible than any they could have imagined—and their fates will be decided.

I’ve got a mixed feeling reading this last book. I thought I liked how Will Henry’s character was portrayed as a loyal boy to his master when he was still young, but as he grew older, his heart hardened. Worst still, the changes in him came abruptly.

Unlike the previous three books, which contained adventures and smooth storylines, this one without them but with two different timelines of Will Henry and the boy we knew in the previous stories have disappeared.

As for Warthrop’s ending, I have no idea if I should pity him or curse him and that what Will Henry did to him served him right. My feeling is currently jumbled up and confusing as hell! I need someone to shout ‘Snap to’ and get over it!