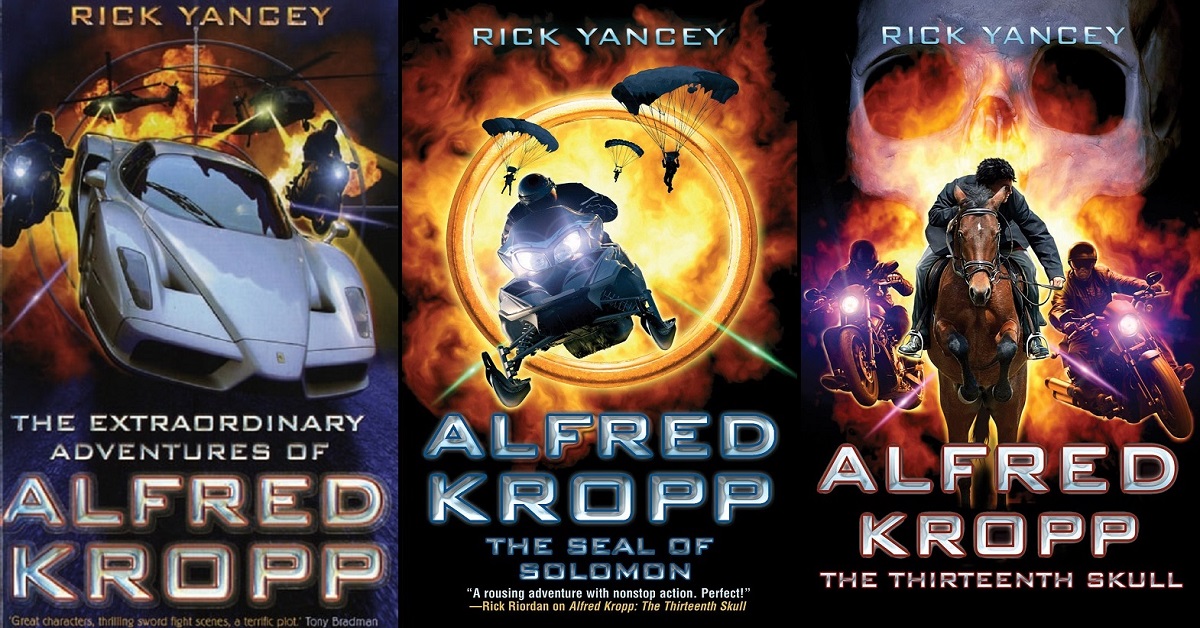 The Excalibur, the Ring of Solomon, and the 13th skull of Merlin? Alex Kropp and the secret agency take us into a whirlwind of adventures in this fast-paced trilogy.

The Extraordinary Adventures of Alfred Kropp

Alfred Kropp was just trying to survive high school when his guardian uncle gets him roped into a suspicious get-rich-quick scheme that changes his life forever: stealing Excalibur – the legendary sword of King Arthur.

But after Alfred unwittingly delivers the sword into the hands of the enemy, he sets off on an unlikely quest to try to right his wrong and save the world from imminent destruction.

The first instalment of the series shows a great promise in what to expect from the remaining books. Its fast-paced, action-packed story is easy to digest and fun to read with some mythical elements.

I’ve only read one completed series by this author, which is the 5th wave, and I prefer this series between the two. I don’t care much about the supposed target audience it’s written for as long as it contains a great adventure, which this book has it all.

But, one thing baffled me tho, why did Alfred still need to return to his foster family? I thought BM was his biological father, and he was a millionaire? BM knew Alfred’s existence long before his passing. Did he not think of his son’s welfare?

The Seal of Solomon

Alfred Kropp is off on another whirlwind adventure when two ancient artefacts are stolen from the OIPEP (Office of Interdimensional Paradoxes and Extraordinary Phenomena) vaults. But these aren’t just any pricey museum pieces – they are the seals of Solomon.

Thousands of years ago, King Solomon used a ring to control and imprison the fallen angels of heaven in a sacred vessel that has held them safe for thousands of years. Now both objects have been stolen by Mike Arnold, and if he uses their power, all hell could break loose . . . literally.

The agents of OIPEP, led by the mysterious Op-Nine, have a plan to save the artefacts, and the world, but none of them really considered the Kropp factor. When Alfred screws up, the ring ends up in the hands of King Paimon, a terrible demon who has a special bone to pick with our reluctant hero. Will Alfred find a way to right his wrong and save the world from imminent destruction . . . again?

Just when Alex thinks it’s finally over for him and he will live his everyday life like an ordinary teenage boy, things stir up again, and it’s time for him to go on another adventure. However, the challenges this time are more intense, with the whole world’s fate resting on his shoulder.

I know I’m reading a fantasy story, but I still feel the storyline is ridiculously unbelievable for a fifteen-year-old boy. Alfred is portrayed as clumsy and does poorly in school, yet he has some profound knowledge to ensure his success in the mission impossible.

Nevertheless, I still have fun reading the story. Alex has so much on his plate. He gets bullied at school, his foster parents aren’t nice to him, OPIEP deceives him, and I guess the knowledge he picks up throughout his adventure is how he gets the sudden wisdom in the end to save the world.

There are some things deep within the belly of the earth that should never be disturbed. Which is exactly why Alfred wants to stay at home. When a vision foretells a cataclysmic battle between the “Sons of Light” and the “Sons of Darkness”, Alfred is called into action.

Whoever finds the fabled 13th skull of Merlin, will have in his hands the power to usher in a new Dark Age … and the Apocalypse. And so the race is on to find the skull, which rests at the bottom of an abyss called Krubera – a place so terrifying it nearly drove Alfred’s mentor, Op-Nine, insane…

Alex Kropp has never failed to take us on a complete whirlwind of an adventure ever since the start of the first book. In this final book, someone is hell-bent on killing him, he also faces danger from within the organization itself, and Alex has to take the matter into his hand and decide what’s best for humankind.

I thought this last one would be special since our hero had experienced all sorts of challenges before this showdown, but I guess I have a high expectation of this final book because I was left disappointed as it did not end with a bang as I had hoped. I was also hoping that Mike Arnold or even Natalia would appear, but they did not.