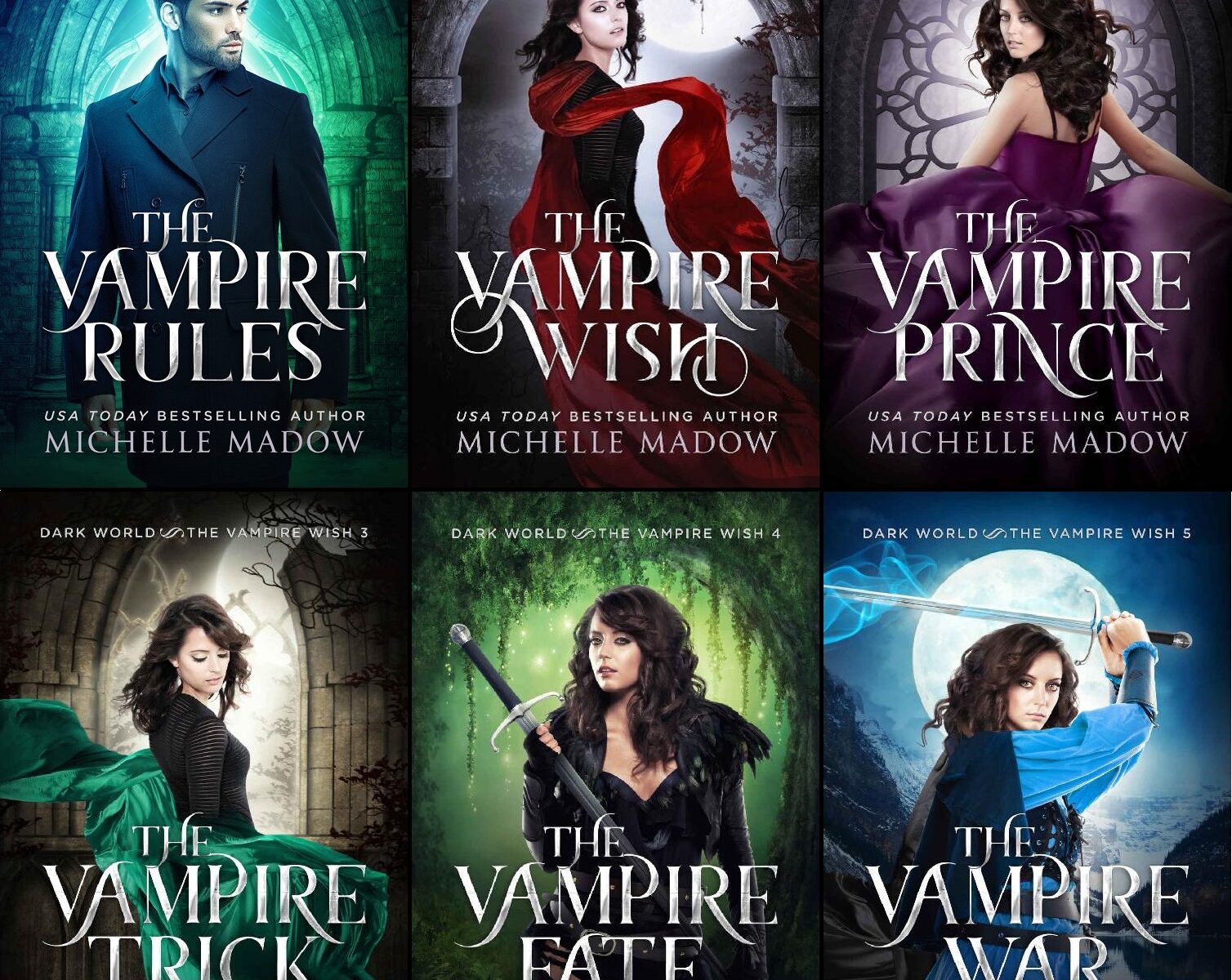 Annika and Jacen were both taken by force into the supernatural world. While Annika became a blood slave, Jacen was an all-powerful Vampire prince. But, they will share the same goal, killing the Vampire Queen, who has destroyed their lives.

The Vampire Wish series is Season one in the Dark World Universe, and it can also be read as a standalone series, as stated by Michelle in her Facebook post.

Before he was a vampire prince, he was just Jacen.

As one of the most promising athletes in the country, Jacen has his life all mapped out for himself. Train hard, win worldwide swimming championships, and go for the gold in the next Olympics.

But while celebrating a successful swim meet at his hotel bar, he meets a mysterious woman named Laila. Not only is Laila beautiful, but she’s smart, witty, and charming. So when she brazenly invites herself up to his room, he jumps at the opportunity to spend the night with her.

He gets far more than he bargained for when she bites his neck and abducts him to the hidden vampire kingdom of the Vale, changing his life forever.

If he can even call it a life anymore…

Honestly, after reading this short introduction to Jacen, I can say that it’s unnecessary to read this book since we’d already learned the truth from the main story. But those who adore him can give it a go as this book is free on Kindle 😊.

I learned something new from this short story that the main book lacked. Queen Laila had wanted to be romantically involved with Jacen! I know it’s normal to sleep with the master in another vampire world, but it does not make sense after reading a few books from the main story and learning her character.

“Fine.” She spoke coolly, and she stood, staring down at me in disdain. “You don’t have to want me romantically. But I’m your sire, which means we’ll always be bound. I urge you not to forget that.” – Michelle Madow

He’s a vampire prince. She’s a human blood slave. They should be enemies… but uniting might be their only hope to prevent a supernatural war.

Annika never thought of herself as weak—until the day vampires murdered her parents and kidnapped her from our world to the hidden vampire kingdom of the Vale.

As a brand new blood slave, Annika must learn to survive her dangerous new circumstances… or face imminent death from the monstrous wolves prowling outside the Vale’s enchanted walls. But not all in the kingdom is as it appears, and when a handsome vampire disguised as a human steps into her life, Annika discovers that falling for the enemy is sometimes too tempting to resist.

Especially when becoming a vampire might be her only chance to gain the strength she needs to escape the Vale.

Point of view from three different characters in one book! Annika, Jacen and Camelia. When I first started reading this book, I would get confused and had to refer back to the beginning to check on the name 😅. But after a few chapters, it’s okay because I developed the habit of checking the character name first before diving into the story.

The plotlines are uncomplicated and easy to digest. Annika wishes to escape from her new role as a blood slave, Jacen wishes to become human again, and in the end, both are looking for revenge. Meanwhile, the villain in the story is Camelia, and she hopes to become queen of Vampire. See, it’s simple as that.

However, in between that, there’re stories to be told — Camelia for her wicked mind and ambition. Annika, with her background story, her life as a blood slave, and I love the part when she ventures inside the crystal cave. Lastly, our Vampire prince’s struggle in controlling his bloodlust and the adventures he shares with Annika.

The mystery behind Annika’s ability to resist the compulsion is yet to be revealed, and I’m excited to read what’s it about her that’s so special. Could it be that Annika has the ‘N’ blood?

To destroy the enemy, she will become the enemy.

Everything has been taken from Annika — her family, her friends, and even her freedom — by the vampires who enslaved her in the hidden kingdom of The Vale. But now she possesses a magical ring that contains Geneva, the most powerful witch in the world, and she’s ready for revenge.

When Prince Jacen invites vampire princesses from all over the world to the palace to compete for his hand in marriage, Annika finds her chance.

By commanding Geneva to turn her into a vampire princess, she can try to win the cold heart of the prince who betrayed her and left her for dead. Can she keep the emotions she used to feel for Jacen in check? Because if her deception works and she becomes his bride, she’ll have full access to the palace… and she can destroy The Vale from the inside.

But with powerful players vying for control of the ring, and a dark magic rising outside the kingdom, there’s far more at stake than just the crown.

This book still has multiple POVs, and it’s more than the first one. The storyline in this book is still in progress, meaning nothing is resolved. The prince is still yet to choose his bride to be, and it might take a while before we hear the wedding bell! But one thing for sure is that we finally know the source of the vampire princess’ blood.

I’m intrigued by what the next one will tell, but first, I’ll read the prequel, and leave Jacen to be with the princesses, get acquainted with them 😜. Meanwhile, I’ll check his background for the girls. I know I should have done it before reading the first book. I’m not sure why Michelle suggested the other way round in her post.

In a kingdom full of secrets, no one can be trusted.

Annika’s life was flipped upside down when she was kidnapped by vampires to become a blood slave in their hidden kingdom of the Vale.

Now, the powerful witch Geneva has disguised her as a vampire princess, and Annika’s living in the palace to compete for Prince Jacen’s hand in marriage. But her quest to become his bride is just a facade. Her real goal? Kill the vampire queen Laila so the kingdom crumbles and she can set the human blood slaves free.

When rebellious wolves attack the town, they leave a trail of vampire corpses in their wake, declaring war upon the Vale. But the wolves didn’t act alone. Someone on the inside is helping them, making everyone a suspect. And one major player won’t make it out alive.

I was disappointed when Jacen ended the competition between the princesses. I thought that would be the main plot, getting to know other princesses, some competition, plus throwing in dramas such as the other princesses tormenting Annika, some near exposure incidents etc. Instead, it’s just too simple.

If these two would hit it off in the end, I need more connections between them. Currently, it’s just not enough. One sure thing, I guess it correctly for Annika’s unique ability to resist Jacen’s compulsion! I wonder what will happen next since all the ruse in killing the Vampire Queen is finally over.

The vampire queen is dead.

Annika shouldn’t have been able to kill the vampire queen Laila—such a task can only be done by the Nephilim, whose race is extinct.

But somehow, she did kill the queen. Now she’s the number one target on multiple hit lists, and she’s only alive because she’s a fugitive at the neutral kingdom of the Haven.

As if that weren’t enough to deal with, the world is in danger and she’s the one prophesied to save it. But she doesn’t have to do it alone.

When fate brings her and Prince Jacen together again, they team up on a quest to find the only object that can save the world as they know it—the Holy Grail itself.

I’m not sure why every time I got to the part I find interesting, it’s almost towards the end of the book with only about 40% left. Yes, I’m referring to the part where Annika and Jacen start the adventure, looking for the Holy Grail.

I want what little time they share, with just the two of them, to bond. Maybe the book was just not long enough to satiate my desire to explore the Dark world and its supernatural habitants. But, enough with the rambling. I shall get on to the final book and find out what destiny awaits the Vampires of Vale.

Find the Holy Grail. Win the war. Save the world.

A lot has changed for Annika since being kidnapped by vampires to become a blood slave in their hidden kingdom of the Vale. Not only has she learned she’s a Nephilim—a race that’s supposedly extinct—but she’s found herself on a dangerous quest for the Holy Grail.

Luckily, she has the vampire Prince Jacen by her side, and the two of them feel ready for anything—especially now that they trust each other more than ever.

But finding the Grail is only the beginning. Because when Annika learns that a demon is leading a pack of wolves to war against the vampires, she must stop him before it’s too late. If she can’t, he’ll open a Gate to Hell… and the world as she knows it will be lost forever.

It is the best book in the series, which I read in one sitting! Action-packed, epic conclusion and a happy ending for Jacen and Annika, which we know matter the most since they are the stars in this series. Those who love Noah will be happy, too, as The Angel Trials series is completed and can be read immediately. Finger crossed, he will have his HEA too.

When I read about Camile running into Peter in Haven, one funny thing was that I’d completely forgotten about who he was, and I thought he was Peter Pan! Why not, eh? This series was mashed up with other supernatural beings such as Vampires, Angel, Werewolves, Faeries, Mages, Wyvern, and even have the Aladdin vibe! In the next series, I hope I’ll get to read more supernatural creatures!