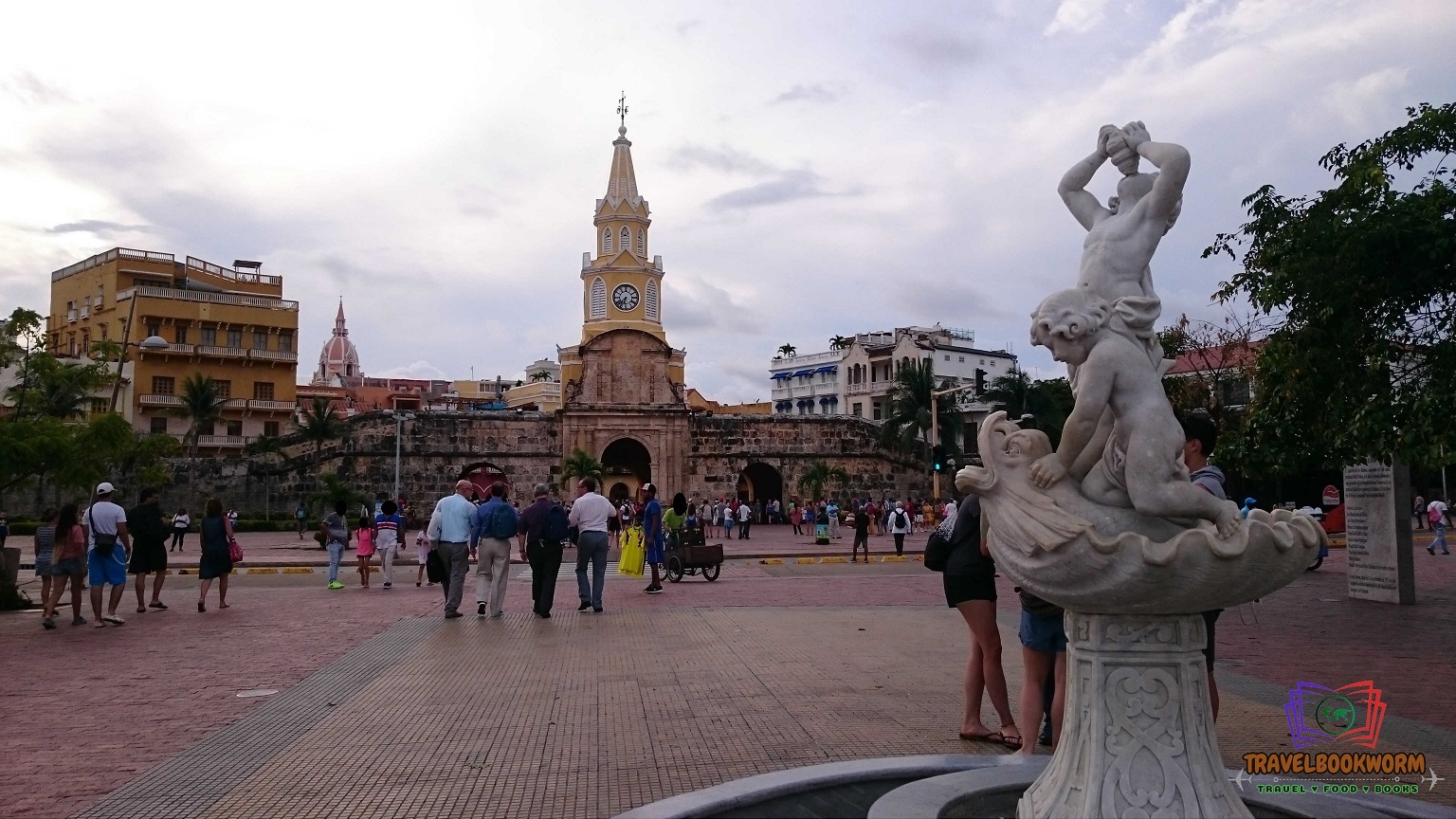 The Walled City was initially built by the Spanish and has been beautifully preserved by the local. The old town with its cobbled alleys, beautiful balcony decorated with flowers and vibrantly coloured colonial architecture, is the most cherished treasure of Cartagena, and what makes it unique is that the area surrounded by Las Murallas, the thick walls built to protect the town against enemies back in 16th – 17th centuries.

The distance between the place we stayed – Hotel Caribe in the new city to this old city was about 3.6km away; taxi fare 8,000COP. We spent two nights at Hotel Torre del Reloj; it’s a historic building, so the room was old and not soundproofed.

There’s a happening bar lounge on the roof, and because of the hotel located in the centre of lots of nightlife, the music was blaring until the early hours of the morning. If you were drunk, you probably would be able to sleep. Otherwise, earplugs might help.

It was hot and humid to walk around in the afternoon, so after the check-in, we stayed in the room and enjoyed the fantastic view of the Plaza de Los Coches / Puerta del Reloj from our balcony.

The main gateway to the walled town and was linked to Getsemani by the drawbridge. Its original name was the Boca del Puente, and the republican style tower with the four-sided clock was added in 1888.

Previously known as Plaza de la Yerba is the triangular plaza behind Puerta del Reloj. It was once used as a slave market. The statue of the city’s founder, Pedro de Heredia, can be found in the middle of the plaza.

That’s our hotel building on the right, our room was at the centre on the top floor. About 5 pm, we headed off to see the wonder in this beautiful old town, and also the neighbourhood called Getsemani.

Its main attraction is the heritage and extraordinary military architecture that is characterised by solid walls and castles to defend it from pirates, privateers and armies that, at the time, sought to plunder accumulated valuable goods and slaves.

This old citadel enclosed in walls, with colonial houses that highlight the colour of the flowers hung in each of their balconies, with small squares, Renaissance domes and clay tile roofs and thick walls today show a city with tradition.

It is a typical Spanish style plaza and was in the colonial days the heart of Cartagena de Indias. It was named Cathedral Square. In 1610, when the Court of the Inquisition was established, it adopted the name of Plaza of the Inquisition. It was the scene of the first Act of Faith or sentence for heresy.

On 11 November 1896, the Council changed its name to Bolivar Plaza or Park. It is located in the middle of the Palace of the Inquisition, Cartagena Cathedral and the Cabildo House, and is also surrounded by the Central Bank and the Gold Museum of Cartagena. Currently, this square is a meeting point for Cartagena people and a place for pilgrimage of tourists.

Also called “Minor Basilica” it was built in 1500 and replaced the primitive one made of adobe and palm that was destroyed by fire in 1612. It is composed of three separated by Doric arches and columns ships.

It has a gable roof with clay tile. Both the apse and the side wall facing the Plaza de la Proclamation and main entrance (Herrera style) are fully built in ashlar stone in sight.

It is located in front of the Casa del Cabildo and of the side facade of the Cathedral of Cartagena. It has witnessed proclamations and speeches issued from the House of the Cabildo, also the great religious celebrations that have taken place in the Cathedral since its founding (XVI and XVII centuries).

It was the place where, on November 11, 1811, the people gathered to endorse the Declaration of Independence. Nowadays all kinds of cultural activities are performed in it.

Largest and oldest square and used as a parade ground. All the important government buildings were here.

One of the most traditional places to visit in the beautiful city of Cartagena de la Indias is the Getsemani Neighborhood, the most recognised of the wall enclosing sectors due to its great history and rick colonial architecture.

This area of town used to live Africans brought as slaves, went inside a group of heroes who conceived the independence of Spain, more than 190 years ago. Quaint bars, cafes, restaurants, bakeries, and shops with various trades such as arrangements shoes, dress makers make the atmosphere of Getsemani is unique in Cartagena.

Another of his references to consider is Parque del Centenario, built in 1911 to commemorate 100 years of independence.

We sat at the Solar bar located next to the Plaza de la Trinidad and had a few drinks while watching the world goes by. Here’re the Food and Drink prices at the Solar Bar

It played a major role in the independence struggle of Cartagena by the prominence of the Getsemani Batallion of Lancers, commanded by Pedro Romero, who participated in the November 11, 1811 revolution that would result in the signing of the Declaration of Independence.

It is so named since 1643, when the building of the Church of the Holy Trinity was completed. Later, as Cartagena became independent of the Spanish Crown, the council decided to call it Freedom Square but it retains its original name. This square is a meeting place for the inhabitants of the getsemani neighbourhood and a scene of all kinds of cultural activities.

Another place we visited before going back to the hotel was the Clock Pub, located just around the corner from the hotel. We spent about 160,000COP on food and drinks over there.

Some of the Food and Drink price at the Clock Pub:

The next day, we had our breakfast at the hotel before heading out. The distance from the hotel to the San Felipe Fort was actually only about 1.4km, 18 minutes walk. However, because we stopped by Centenario Park (there’s a row of a used bookshop near the entrance), Pasaje Leclerc (local market), and also enjoying the view along the harbor, it added to the distance and time. It was worth the sweat, though, and the view overlooking the fort and La Popa with an old canon was fantastic.

It covered with the power of his guns the canal of Gracia and the surrounding of the San Felipe de Barajas Castle. It was built in 1631 by the governor and Engineer Francisco de Murga and Lucas Baez, his main master builder.

It was originally built with a simple thin wall that settled the bulwark of clear Dutch origin. This fort, located on the right side of the Media Luna battery confirmed with the bulwark of Santa Teresa, a joint defence of the place.

We reached to the counter about noon and the sun was excruciatingly hot. Around the area, there were many vendors selling hats and bottled waters. However, if you didn’t want to buy it from them, no worries as there’s a shop on top of the fort where you could get drinks/ice cream and also souvenirs.

The Castillo San Felipe de Barajas, on San Lazaro hill, forms part of Cartagena de Indias’ ensemble of monuments, included in UNESCO’s World Heritage List since 1984.
The Construction began in 1657 and ended in 1769 with the termination of its lateral batteries, now covering the entire hill.

It was strategically situated at the top of San Lazaro hill, which has a maximum height of 40 meters, to protect access to the city by land.
It is considered a masterwork of military engineering and, together with the walls, formed the city’s principal defence, one of the major fortified plazas of the Caribbean.

It was hot & windy on top, but the view was magnificent. We could see the new and old city next to each other and also La Popa Monastery, one of the places that I wanted to go but didn’t get to go.

In the Castillo San Felipe, progressive defence system was incorporated to cut off the advance of the enemy to the fortified plaza. Its batteries cover the ground in front, and these are protected from one another.

Through the underground galleries, mines can be detonated to explode the land underneath the assailant. Having 62 cannons of all calibres, it was the most important part of the defence of Cartagena de Indias.

The edification was the result of necessity, stemming from the fear and nervousness that existed in a city threated by war for three hundred years.

After the victory over the English, and expecting new confrontations, the Crown began the reinforcement of the city’s fortifications. The special distinction goes to the great engineer later named field marshal, Antonio de Arevalo, who served the city and the viceroyalty for 58 years, until his death in Cartagena in 1800.

With the experience of Vernon’s attack, Arevalo reinforced San Felipe, since it was the most advanced and vulnerable of the city’s defences. Between 1762 and 1769 the hill was cut and the stone was inserted to line the bonnet, the collateral batteries of La Redencion, La Cruz, El Hornabeque, San Carlos y Los Doce Apostoles, Santa Barbara and San Lazaro.

He added cisterns to store rainwater, sentry boxes, ramps and a complete system of tunnels designed to install explosives that could detonate under the feet of the enemy who tried to scale the fortress. Arevalo’s solid system was never put to the test.

Its artillery consisted of eight 16-pound cannons, covering the northeastern side of the fortress. It points at the Popa valley, where the English camped in 1741, and at the hills situated to the east of the city.

It communicates by this ramp with the rest of San Felipe and is complemented by a small bulwark designed to obstruct the enemy’s advance if the Bateria de San Carlos Y Los Doce Apostoles is sieged.

After spending about an hour there, we walked back to the old city and stopped by Lenos Carne Y Cava to have lunch. I had Cartagena Tropical Fish (Mojarra) served with coconut rice, and Mike had Churrasco / Skirt steak. It was a lovely meal and worth the money.

In the evening, we went to Leon De Baviera in Getsemani, had a few drinks and a meal (3 type sausage). The beer price was slightly cheaper than one we had last night at the Clock Pub.

On our way back, we saw a band festival going on at the Plaza de la Trinidad y Feria gastronómica Centro de Convenciones. There was a massive queue to get inside, so we couldn’t be bothered to get in as we could hear it perfectly fine from the Pier Los Pegasos. The band was playing until 9 pm.

Sculpture consisting of three Pegasus made in fibreglass, two large and one small. One of the big ones lies alone on a pedestal; the other one near the small one and the third one besides the other small one on another pedestal.

Both pedestals are square, in concrete and reef stone veneer, framed by moldings, green the upper one and the lower one yellow. This set is a donation of Cartagena sculptor Hector Lombana Pineres.